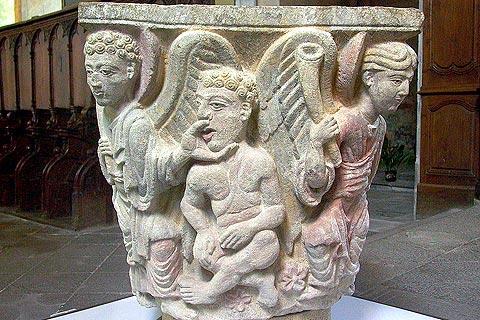 Mozac is a small town in the Puy-de-Dome department (in central Auvergne region), near Riom and Volvic and to the north of Clermont-Ferrand.

Above all, it is for the Abbey of Saint-Pierre that people visit Mozac, but take the time for a stroll around Mozac to see the town centre and in particular the Chateau de Portaberaud, a 17th century manor house and ornamental gardens close to the abbey.

Founded in the 7th century, the abbey at Mozac (correct name is the Abbey of Saint-Pierre and Saint-Caprais of Mozac) was for the first two centuries an important regional religious centre, before being superceded by Cluny in 1095, at which time an important church was constructed here. 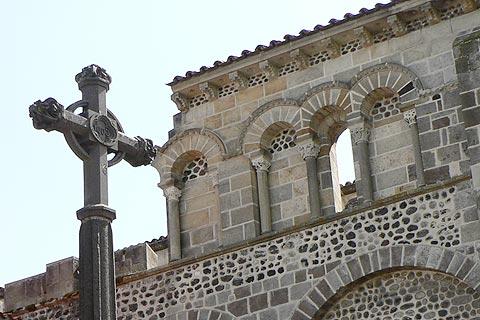 Following an earthquake in the 15th century much of the 12th century roman style abbey that stood here was damaged and rebuilt. As a consequence of the renovations the abbey we see today is a mix of styles: the crypt and eastern entrance are pre-Roman, the north facade is in Roman style, and the cloister and transept are gothic style.

The monks remained here until the revolution, at which time the abbey church became the town church for Mozac.

The rebuilding is in the gothic style using the very distinctive dark stone that you will see widely used in church construction in the Auvergne (the stone is known as the 'pierre de volvic'). The inset arches and the contrast between the dark stone and the light lime used between the stones give it a very decorative appearance.

Inside, the church incorporates many architectural features, such as the capital stones, that were recuperated from the rubble, while others can be seen in the adjacent museum. It is these capital stones, featuring a wide range of ornate carvings and designs, that are the highlight of Mozac abbey, and the reason it is an unmissable destination for enthusiasts of roman art.

Apart from the capital stones it is the crypt, that predates the roman style church, and the gilded and decorated shrine to Saint-Calmin that are among the highlights in the abbey. A second shrine here contains the relics of Saint Austremoine.

Mozac Abbey as a whole is a classified historic monument, and further important parts of the earlier building can be seen in the museum on site. 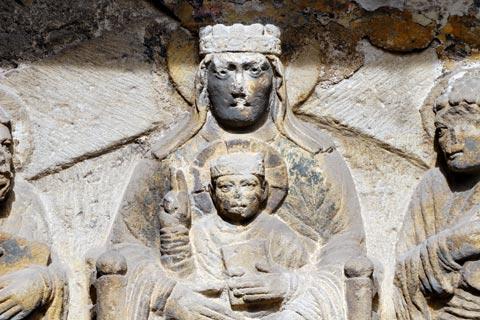 Although this is not the most visited part of France, there are several towns and villages of interest in the region around Mozac such as Riom and Volvic and enthusiasts of religious architecture will certainly want to visit both the church and cathedral in Clermont-Ferrand.

Map of Mozac and places nearby

Visit near Mozac with France This Way reviews

Mozac is classified as a listed town of Art and History

The French version of this page is at Mozac (Francais)