The basilica Notre-Dame-du-Port is an important church on the north-east edge of the centre of Clermont-Ferrand, listed as a UNESCO world heritage site and one of several important roman style churches in the Auvergne region.

In contrast to the very sombre cathedral in the town, which is built of black lava stone, the basilica is constructed in a very pale sandstone. The name doe not come from a port as you might expect, but from a Latin word 'portus' that refers to a place of storagethat was originally in this part of Clermont-Ferrand.

Explore the basilica of Clermont-Ferrand

France This Way comment: the basilica in Clermont-Ferrand is interesting because it has preserved many of its original aspects - both outside and inside - so a visit is recommended if you visit the town 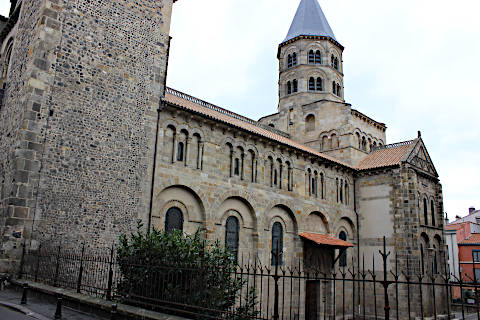 The basilica we see today was built in the 12th century, although an earlier church is thought to have stood in the same location from the 5th century onwards (no trace of this earlier church can be seen today). As was common at this time, it is built in the romanesque style of architecture and was originally the centre of activity for a local community of monks.

The most significant later changes to the structure took place in the 15th century after some damage was caused by an earthquake: the upper part of the tower above the transept was replaced at this time.

Monastic settlements were disbanded after the revolution, and the church was neglected after this time: the furnishings were removed, the bells were melted down and two towers collapsed. The condition became so bad that there was a plan to demolish the structure and replace it with a market hall, but this was prevented after a petition by the inhabitants of Clermont-Ferrand.

During the 19th century several periods of renovation took place, with other works carried out in the 20th century and major works at the beginning of the 21st century: the basilica has undergone a programme of renovation and improvements in recent years, in part because of being listed as a world heritage site.

At the rear of the basilica you can see the chevet with the four semi-circular chapels and decorated with patterns of coloured tiles: this is perhaps the most charming part of the structure. The carvings above and to the sides of the south entrance, although quite damaged, are also interesting.

Clermont-Ferrand basilica follows a very traditional 'latin cross' layout, with a main nave, two side naves, a transept, a choir and a path (the ambulatory) behind the choir that leads to the chapels. There is a crypt below the choir.

The inside of the basilica is flooded with light because of the numerous windows and the walls are painted in a light ochre colour, so it is much less sombre than many cathedrals and churches you have visited.

It is the capital stones (the carved stones at the top of the columns) that are the most interesting feature here. As well as the more common carvings of flowers and mythical creatures that you see in many romanesque style churches, several of the stones are very elaborate and relate Biblical stories.

There is a small statue of the Virgin in the crypt of the basilica that forms the centre of a procession through Clermont-Ferrand each year, a tradition that has taken place since 1614, when the town paraded the statue in the hope of avoiding a famine. The current statue is a replacement of the original, from the early 18th century.

Elsewhere in the basilica you can also see various paintings from the 17th and 18th centuries, and stained glass windows that were replaced in the 19th century, although these items are of less interest. 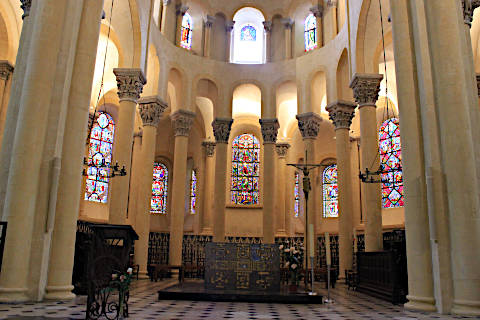 You can explore the centre of Clermont-Ferrand and the cathedral while you are here. The other four important romanesque churches in the Auvergne are at Issoire, Saint-Nectaire, Saint-Saturnin and Orcival.

Map of Clermont-Ferrand basilica and places nearby

Visit near Clermont-Ferrand basilica with France This Way reviews