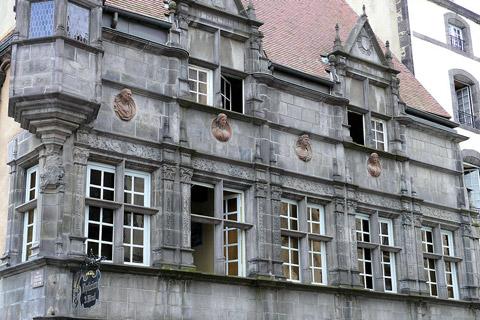 Riom is a quiet provincial town in the Puy-de-Dome department, in the Auvergne region of central France a short distance north of Clermont-Ferrand.

A town with a long history, Riom was capital of the Auvergne through the Middle Ages and as a result there is a significant architectural heritage to visit, particularly of interesting Renaissance period buildings.

The historical centre is clearly designated - although the original ramparts for the town have long since disappeared, they have been replaced by a ring of broad boulevards that now encircle the region of interest to visitors. Start your tour of Riom old town along the streets called Rue de l'Horloge, Rue de l'Hotel de Ville and rue du Commerce. 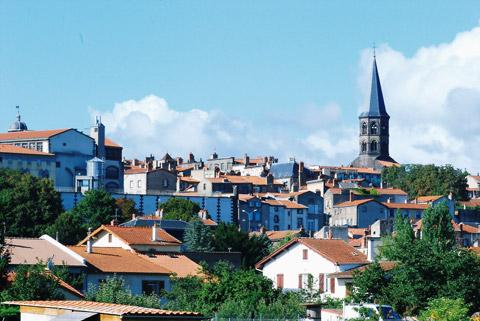 The first monument you will notice is the clocktower. This is an imposing stone monument built in the renaissance period and the most easily recognisable monument in the town, with the tower topped by a dome supported on eight columns. Ascend the tower (bring your climbing legs) for great views across the city rooftops from the viewing platform at the top.

Next stop, we suggest you visit the important religious monuments in the town:

The Town Hall in Riom, once a fine townhouse for a member of the local nobility, holds an artistic secret: enter the interior courtyard to see two busts of local dignitaries by Auguste Rodin. Other notable townhouses include the Hotel Arnoux de Maison Rouge and the Hotel Soubrany, each with ornate carvings around the door and windows.

The Consuls House is the only remaining half-timbered house in Riom, and dates from the 15th century. Elsewhere in the town you will see various other items of interest, such as fountains, statues and ornamental doorways: the town map from the tourist office contains details of these and many other small highlights.

Note: in the cemetery at Riom there is an unusual war memorial, paying tribute to those who were shot as pacifists, or in order to set an example to the other troops. This kind of memorial is very rare in France (and elsewhere). 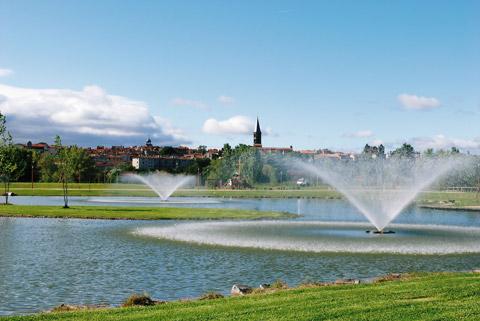 There are two notable museums in Riom - the 'Regional Museum of the Auvergne', and the Francisque Mandet Museum of Fine Arts (which also has an attractive courtyard)

The weekly market in Riom takes place on a Saturday, in the Place de la Federation - while here tear yourself away from the market stalls for a moment to admire the obelisk and the old wheat hall in the square.

Mozac and Volvic are other towns nearby that merit a visit: Mozac is best known for its roman style abbey, and Volvic is of course very famous for its bottled water.

Map of Riom and places nearby

Visit near Riom with France This Way reviews

Plan your visit to Riom, Puy-de-Dome

Regular market(s) are held in Riom each Wednesday & Saturday. (Markets are held in the morning unless stated.)

The French version of this page is at Riom (Francais)