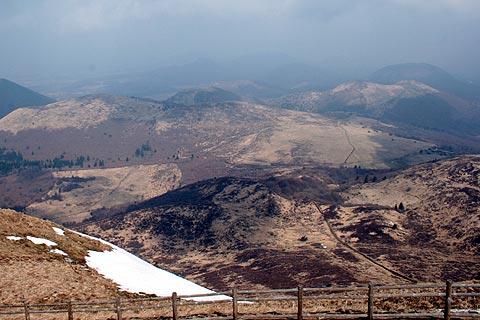 Puy-de-Dome is found just west of Clermont-Ferrand, in the Orcines commune and in the department of the same name, and towards the north of the Chaine-des-Puys chain of volcanoes in the Parc des Volcans.

An extraordinary site, Puy-de-Dome is an extinct volcano that has been listed as one of the 'Grand Sites of France'.

The Puy-de-Dome rises to 1464 metres above sea level, significantly higher than the other peaks in the immediate area, and therefore has views in all directions across mountains and volcanoes for as far as the eye can see. 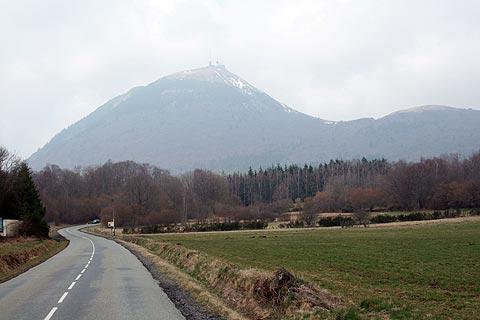 Reaching the summit of Puy-de-Dome

There are two ways to reach the top of Puy-de-Dome:

1) Park at the Col de Ceyssat and walk up the winding path, allow at least an hour and lots of water if its hot. There is a level change of about 350 metres and although the path isn't very steep it is consistently uphill! There is also a six kilometres path to the summit from the visitor centre that will take about 1 1/2 hours.

2) Take the train that climbs the mountain from the visitor centre and takes about 15 minutes to reach the summit.

Whichever way you reach the top of the Puy-de-Dome, there is then a footpath that follows around the top of the hill so you can enjoy the views in all directions. Close to the summit is an unexpected site, the remains of a Roman Temple called the 'Temple of Mercury'. They chose a great location for it, but the challenge of getting the temple built must have been substantial!

Unfortunately there is also now a large observatory and the crumbling ruins of a 19th century building on top of the hill, but these matter less than you would think because your eyes are always turned away from the hill to look at the view, not at the eyesore behind your back!

The weather and time of year of your visit will make a big impact on what you see - there was snow on the ground at the end of May when we visited Puy-de-Dome, and the surrounding forests were mostly not yet in leaf. To best appreciate the views wait for a very clear day if possible. 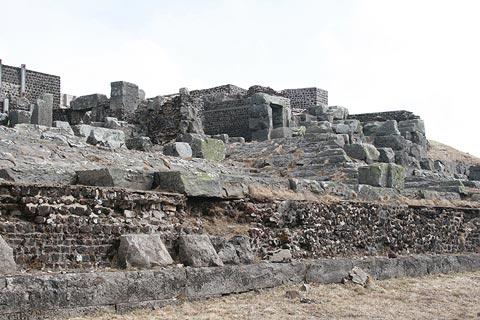 There are also various visitor facilities such as a cafe at the top of the Puy-de-Dome.

The natural environment is the main highlight in the Parc des Volcans and around Puy-de-Dome but you still have the opportunity to visit various towns and villages. In particular there is a very distinctive style of religious architecture as you can see in the church and basilica of Clermont-Ferrand, the church at Orcival and the Abbey at Mozac.

Map of Puy de Dome and places nearby

Visit near Puy de Dome with France This Way reviews