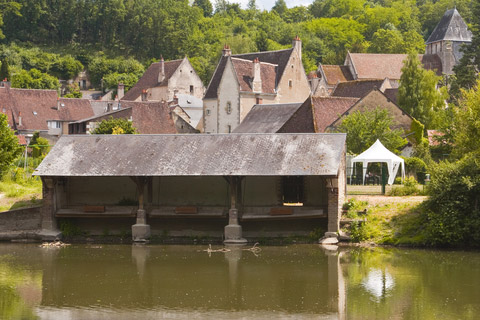 Lavardin is situated 20 kilometres south-west of Vendome and 40 kilometres north of Tours, towards the north of the the Centre (Loire Valley) region of France.

France This Way comment: although it is a small village with only approximately 260 inhabitants, and slightly remote from the main sights in the Loire Valley, Lavardin is very picturesque and in a lovely setting on the Loir river with the ruins of a medieval castle poised dramatically above the village so a visit is very enjoyable

Start your visit on the ancient gothic style eight arched stone bridge across the Loir river. From here you get a good view up across the village and the castle on the hill.

Cross to the other side of the bridge to take a photo of the bridge and river with the castle and village behind and to see the ancient lavoir - then stop for a game of 'pooh sticks' on the bridge!

The houses in the village are both pretty and interesting, with some fascinating period features (16th century) - such as colombage, ornate windows and slate rooves to discover. The current town hall for Lavardin, called the Priory Saint-Genest, was once a presbytery.

Among the highlights are the Maison Perrault on Rue de la Barriere, a gothic style house dating from the 13th century that you might almost think is a church when you see the stone windows; and the Maison Florent Tissard, a substantial medieval house with a tower and raised balcony.

The principal attraction in Lavardin is perhaps the roman style Church of Saint Geneste, in the 11th century part of a priory that dominated the centre of the village. The understated exterior gives little clue to the impressive frescoes, carvings and decorations to be found inside the church, of which there are a great number.

It is true that some of the frescoes are in poor condition, but many still retain their vibrant colours and represent Christ and the saints and other biblical scenes such as the crucifixion of Saint-Peter and the baptism of Christ by Saint-John. The frescoes were painted over a long period, from the 12th century to the 15th century, before being plastered over in the 16th century. They were rediscovered in the 20th century: this three centuries of protection no doubt has helped preserve the quality of the frescoes.

The medieval village is dominated by the ruined chateau towering above it, atop a rocky cliff. Dating originally from the 11th-14th centuries the castle was rebuilt in the 15th century but has been a ruin since long ago, when the troops of Henry 4th were ordered to destroy it in the 16th century.

The castle still has its donjon (keep) and the remains of some defensive walls including the entrance through an imposing gateway with towers either side. You should also walk up to the castle to enjoy a lovely view across the church and the medieval houses in the centre of Lavardin.

Lavardin is officially classified as one of the 'most beautiful villages of France'. 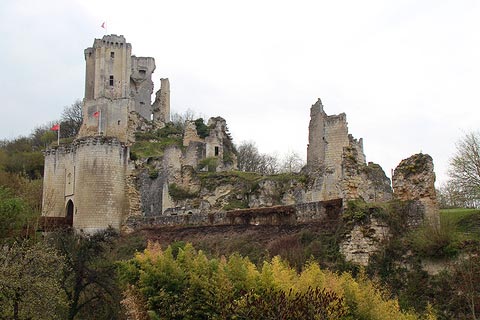 Close to Lavardin, the troglodyte village of Troo is well worth a visit, with many of these ancient troglodyte caves now restored as fine residences. Vendome is also nearby, a larger town well deserving of a visit.

You can find more travel ideas in the Loir-et-Cher guide and the Loire Valley guide.

Map of Lavardin and places nearby

Visit near Lavardin with France This Way reviews

Plan your visit to Lavardin, Loir-et-Cher

The French version of this page is at Lavardin (Francais)