The Royal Château de Blois is located in the town of Blois, in the Loir-et-Cher département of the Loire Valley, in France.

The story of the castle on this site in Blois starts in the 10th century, and the castle as we now see it starts with the arrival of the widow of the recently murdered Duke of Orléans at the end of the 14th century. It was the castle where Joan of Arc was blessed in 1429 before setting off to defeat the English at Orléans, the turning point in the Hundred Years War.

It was in the 16th century that the castle became a residence for kings when King Louis XII used it as a base and significantly developed the castle and the gardens at Blois. The development continued with Francois I, although he rather lost interest in the chateau after the death of his wife. It was during this phase that the remarkable spiral staircase was added, a highly ornate structure with 'windows' open to the courtyard outside. 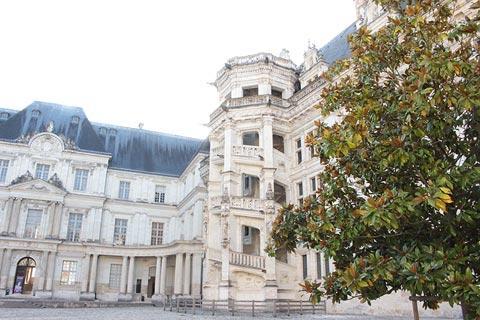 The Chateau de Blois continued to be a royal residence for his successors, Henry III and Henry IV, after the Wars of Religion had forced the former from Paris.

The downfall of the castle began in the 17th century, after the death of Gaston d'Orléans who had made further improvements. Work stopped, and the castle became abandoned and fell into disrepair. With the French revolution it suffered further, as part of the general movement to destroying the buildings of the nobility.

Reprived from a demolition order, the Chateau de Blois was one of France's first buildings to be classified a historic monument (1841).

It was to be another fifty years before the importance of the castle was to be officially recognised, when it was listed as a historic monument, and subsequently restored to its former glory. Unfortunately many of the important statues and decorative features had already been removed or destroyed during the revolution, and the development of Blois town around the castle in the 19th century had led to the gardens being destroyed, but it remains a very interesting castle to visit.

Unlike most of the Loire valley castles, that present a single identifiable style, the Chateau at Blois comprises various buildings that were built over the course of several centuries (from the 13th century to the 17th century), and thus consists of a series of different styles. This variety is best seen in the central courtyard where the structures from various epochs can clearly be seen.

Before you even enter the castle, you can admire the facade that dominates the Place du Chateau in Blois. This is dominated by the "flamboyant gothic" style red-brick wing, built under Louis XII in the early 16th century, and (to the right) the gothic hall that remains from the original 13th century fortress: this hall is the largest gothic hall in France.

The facade includes a statue of Louis XII set in the wall above the entrance. The stone masonry around the statue and around the windows of the top floor and the pattern incorporated into the brickwork are among the points of interest. The Blois Museum of Fine Arts is situated in the rooms of the first floor of this wing.

Before paying to enter the castle you can walk around to the right of the castle and see the high side of the wing added by Gaston d'Orleans using renaissance style architecture in the 16th century (1515-1520) and incorporating two rows of open galleries. The contrast in style between this wing, and the main facade built just 15 years earlier, reminds us how quickly architectural styles were changing in the 16th century. 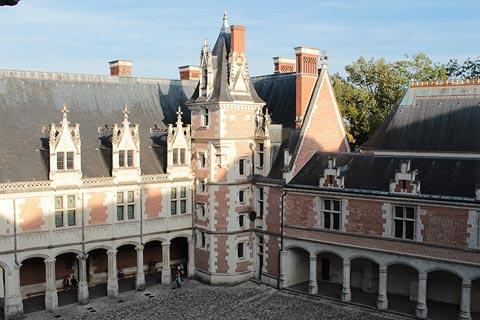 The most recent part of the castle is the classical wing, seen to the rear of the Chateau de Blois and built in the 1630s. You can see this wing from the public gardens behind the castle but is best appreciated from the castle courtyard.

Inside the interior courtyard of the Chateau de Blois you can see the four wings of the castle together: as you enter, the gothic medieval fortress is behind you, the "flamboyant" Louis XII wing is on your left, the renaissance Francois 1er wing is on your right and the classical Gaston d'Orléans wing is straight ahead of you.

The renaissance wing includes the grand spiral staircase, the most famous feature at Blois chateau and the full height of the castle: the staircase includes statues and royal motifs such as the salamander as well as other impressive detail in the stonework. The other important building in the courtyard is the Saint-Calais chapel built in 1508.

After admiring the main structure of Blois castle you can visit the rooms of the castle, that include several notable highlights. These include the cavernous 13th century 'salle des etats' in the earliest part of the castle, with its ornately decorated ceiling; the opulent decoration of rooms such as the Henry IV bedroom; and the 'chamber of secrets' of Catherine de Medici.

There are about 30 furnished rooms to visit, many with beautiful floors and ceilings. Rather than being furnished in the traditional style of recreating the style of the epoque, on display in the rooms you can see thousands of historical items including furniture and paintings. 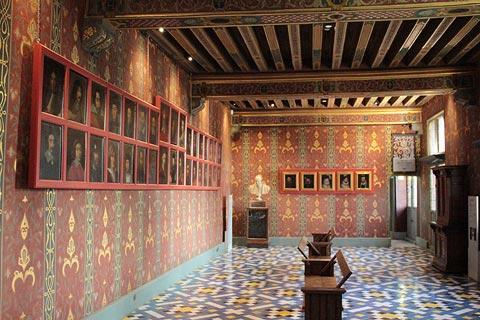 The castle is open every day of the year except Christmas Day and New Years Day. Admission is about 10 euros for an adult, or 15 euros if it also includes the Son et Lumière display. Various reduced price tickets are available that combine entrance with other attractions in Blois such as the Maison de la Magie or the Fondation du Doute (see Blois guide for details).

From April to September there is a 'Son et Lumière' show in the castle courtyard every evening, which is impressive and a great way to help understand the history of the castle and the important events that took place here.

If you enjoy visiting castles you will certainly also want to visit the Chateau de Chambord and the Chateau de Cheverny: both of these are just a short distance east of Blois. See more Loire Valley castles.

Slightly further but highly recommended is the Chateau d'Amboise to the west - a lovely chateau and you will also want to explore the other highlights in Amboise while you are here!

See more castles in France. You can find more travel ideas in the Loir-et-Cher guide and the Loire Valley guide.

Map of Chateau de Blois and places nearby

Visit near Chateau de Blois with France This Way reviews