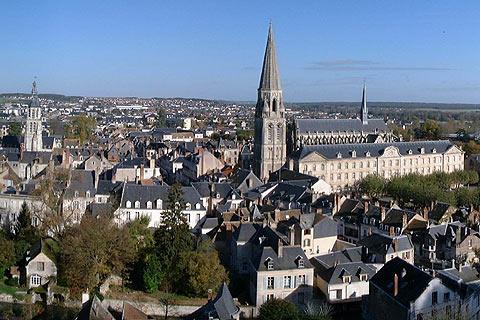 The town of Vendome is situated on the Loir River in the Loir-et-Cher department (Centre region) about 30 kilometres north-west of Blois and only 40 minutes by train from Paris, making Vendome a popular commuter town with people working in the capital. The town is classified as both a 'town of art and history' and a '4* town in bloom'.

France This Way comment: after the town center suffered substantial damage during bombardments in the Second World War, Vendome has preserved and restored various monuments and buildings of historical importance, and has several parks and is a pleasure to visit.

The main car parks are to the south of the town behind the abbey and music school and near the castle, although there are several other small car parks elsewhere in the centre such as the Place de la Liberté in the north-east. Start your visit at the Vendome Tourist Office, situated in a listed building (the Hotel du Saillant) at 47 Rue Poterie, in the west of the town near the Town hall. 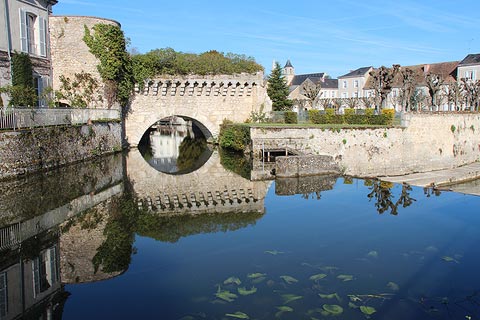 The most important monument in Vendome is the Abbey of the Trinity that dominates the town center. Built originally in the 11th century in the roman style (the tall tower dates from this period), most of the current abbey church is a gothic style reconstruction from the 13th century onwards - both the facade and the chevet are in this ornate decorative style called 'flamboyant gothic'. Inside the abbey church, the carved wooden stalls are a highlight.

In the cloisters and other buildings of the abbey you can visit the town Museum, with artefacts from the history of the town as well as sections dedicated to paintings and ceramics. Traces of the origins of the building can also be seen, such as the staircase that once allowed the monks to access the dormitory.

Throughout the town centre you will see other chapels and churches of varying importance, for example Place Saint Martin was originally the site of a gothic style church of which only the tower now remains. As well as the tower you can see a four storey medieval house and a statue of Marechal de Rochambeau.

Unusually for the Loire region the castle in Vendome was never restored or converted into a renaissance style mansion and its extensive ruins stand evocatively along a hilltop above the town. There are sufficient parts remaining of the towers and defensive walls to suggest the size of the original castle: the castle ruins are now explored as part of a large park area, well worth visiting for the views across the town from here.

Constructed and improved from the 13th century onwards there are various places in Vendome where you can see traces of the defensive ramparts, such as the Place Belot. The most important is the imposing Porte Saint Georges, one of four gateways that originally provided access to the historic town (the others are no longer standing) that also served as the Town hall over a period of several hundred years.

Several other sections of wall and towers (the Tour de l'islette, the Porte d'Eau) can also be seen. You can also see several medieval half-timbered houses dating from the 15th century onwards in the center of Vendome, and stroll along the river in the carefully maintained gardens of Park Ronsard next to the Town Hall, which include a 15th century washhouse.

There are several attractive bridges and river crossings in the town and as well as the gardens of Parc Ronsard and the park around the castle you will see numerous gardens, plants and flowers throughout the town: Vendome has won many awards for its gardens and as well as admiring the magnificent ancient trees there is always something new to discover as well: take a look at the park behind the Abbey of the Trinity and in Place Belot as examples.

The principal market in Vendome is held in the town center each Friday. There is also a substantial pedestrianised centre to Vendome with a good selection of shops and cafes. 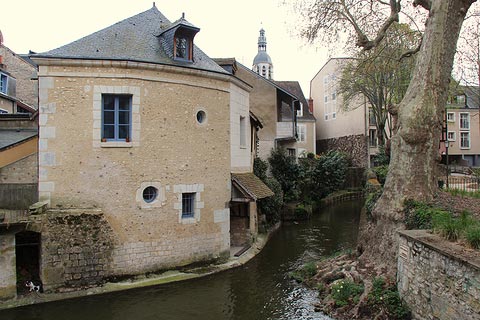 Our favourite destination near Vendome is the pretty village of Lavardin with its ancient stone bridge, medieval houses and ruined castle.

You can find more travel ideas in the Loir-et-Cher guide and the Loire Valley guide.

Map of Vendome and places nearby

Visit near Vendome with France This Way reviews

Plan your visit to Vendome, Loir-et-Cher

The French version of this page is at Vendome (Francais)