The Chateau d'Amboise sits on a ledge above the town of Amboise in the Loire Valley, in a position with lovely views over the town, the Loire river and the countryside: the castle was built here for the strategic view it provided over the Loire River at an important crossing point - at that time it was a ford, although there is now a bridge.

The castle is an imposing sight from the town - in particular from the bridge and the other side of the river - and also dominates a large part of the town centre.

France This Way comment: many factors combine to make Amboise castle one of our favourites in the Loire Valley: the castle and chapel, the interior of the castle, the lovely views across the rooftops of Amboise, and the beautifully maintained gardens. Although you can find other castles that surpass Amboise on any one of these reasons, there are few that have all these highlights in one place!

History of the Chateau d'Amboise

The castle has a long and illustrious history, dating back to the initial construction of a castle here in the 11th century by the Count of Anjou. By the 15th century Amboise had a substantial castle that was seized by the Charles VII for the French royal family after its then owner, Louis d'Amboise, had been executed for plotting against the King.

It was at the end of the 15th century under King Charles VIII that the castle in its current form took shape, under the instructions of King Charles VII. As well as reconstructing the castle in a late gothic - early renaissance style, it was also at this time that Charles VIII expanded the terraces and gardens that stand next to Amboise castle. These were the first gardens in France to be in the 'French style' that was later adopted all across France.

Unfortunately Charles VIII died at the castle when he banged his head on a lintel! The castle now passed to Francois I and entered its most illustrious period. 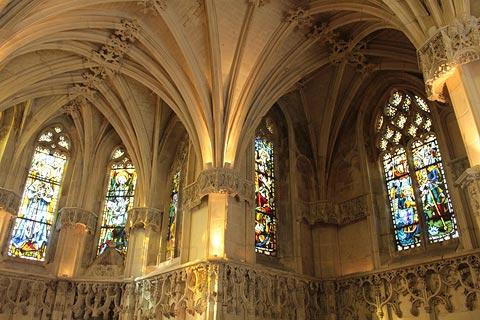 The importance of the castle continued to increase under Francois I - it was him who invited Leonardo da Vinci to live nearby (at Clos Lucé) and who was entertained at the castle, and is also said to have provided inspiration for some of the architectural highlights at Francois' castles. It is claimed that Leonardo da Vinci is buried in the Saint-Hubert Chapel next to the castle.

Over the following decades the castle was home to many royals, including King Henry II, Catherine de Medici, and Mary Stuart (queen of Scotland, who was to marry Francois II). The relative peace was to be shattered during the wars of religion, and in 1560 a terrible vengeance was wreaked against the protestants who had plotted against the King, with more than 1000 of them being hung from the castle walls.

The glory days of Chateau Amboise were passed and within 100 years the castle was more or less abandoned. A substantial part was demolished as a consequence of the French revolution, and further demolition following when parts of the castle were deemd to be unsafe.

The fortunes of the castle only began to improve from the middle of the 19th century. King Louis-Philippe of the newly restored monarchy in France started renovating the building, with further work being carried out intermittently over the following 30 years by his descendants. Amboise chateau is still owned by the descendants of Louis Philippe, who maintain and operate the castle as an important tourist attraction.

You enter the castle along a long path in the centre of the town. The castle is open all year round with visitors able to explore freely in the royal apartments, the chapel and the surrounding gardens, although parts of the castle such as the underground passages can only be accessed on guided tours at restricted times.

One of the first monuments you will see inside the grounds of the castle is the Saint-Hubert chapel, built in the flamboyant gothic style at the end of the 15th century. This is among the highlights of a visit, with its impressive facade, stone carvings, vaulted ceiling and stained glass windows. Inside the chapel and to the left you can see the burial place of Chateau d'Amboise. Some of the best views across the roofs of Amboise are from the belvederes behind and near the chapel.

As you cross the courtyard towards the castle you pass the place where Charles VIII died in 1498, at 28 years old, after hitting his head on a door lintel. The wing to the left is in gothic style and the wing to the right is in the renaissance style: Amboise was the first castle in the Loire Valley to use this style.: look in particular at the stonework around the windows of the two wings.

Inside Chateau Amboise you tour several impressive rooms: the Council Chamber with its fireplace and vaulted ceiling and th Orléans apartments were our favourites. There are enough rooms to be interesting but not so many that you lose interest! You also see a large spiral ramp that is wide enough to allow horses to enter the castle from the town below! 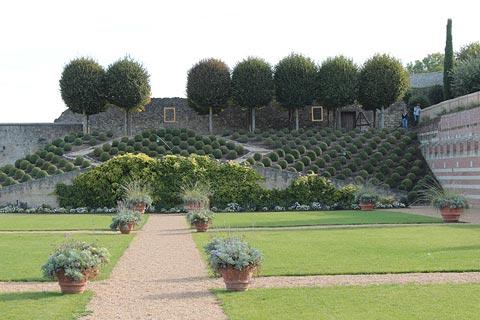 After leaving the castle you can explore the gardens. The terraces, lawns and gardens are not enormous but they are very lovely, in particular the slope covered with box plants and the view of the castle across the flowers. There are also various contemporary features in the gardens as well as one of the ancient gateways into the castle.

The entrance price of around 12 euros is one of the highest we paid in the Loire Valley, but the castle and grounds are exceptional so we certainly recommend you visit when nearby. Various music festivals and medieval re-eanactments are held in Château d'Amboise during the summer, including various nocturnal events.

If you have plenty of time in Amboise there are two more important monuments to visit! The house where Leonardo da Vinci lived is at Clos Lucé and you can also visit the Domaine Royal of Château Gaillard and the Gardens of the King, a newly renovated manor house and gardens just beyond Clos Lucé.

Map of Chateau d'Amboise and places nearby

Visit near Chateau d'Amboise with France This Way reviews

The French version of this page is at Chateau d'Amboise (Francais)