The Pointe de la Malouine is the promontory to the west of the town centre in Dinard, the seaside resort on the north coast of Brittany.

France This Way comment: the Pointe de la Malouine is one of our favourite regions of Dinard, with several impressive 19th century villas, lovely views and a pretty coast path among its attractions 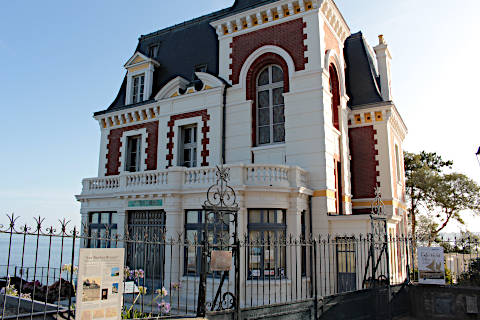 From the beach in the centre of Dinard, the view is dominated by the promontory to the left which is a raised area with several imposing villas along the top of the ridge. This area of the town is called the Pointe de la Malouine and these villas are among the earliest to be built in Dinard, at the end of the 19th century.

A very pleasant walk follows the top of the ridge to see the villas, then you can carry on to explore more villas or descend to the sea from where a coast path return to the town centre. The walk will take you about 45 minutes to complete.

To start the walk, from the west end of the beach (the Plage de l'Ecluse) you can take a staircase to the Avenue Poussineau, the main street with the majority of the villas.

The villas of Pointe de la Malouine in Dinard

A large part of the charm of the villas in Dinard is that they each have their own characteristics such as different window styles, chimneys and brickwork patterns. The principal villas in the order that you reach them are:

If you turn left from Villa Cézembre and return to Dinard centre along Rue de la Malouine you can see some more imposing villas such as Villa Bel Esbat, Villa l'AAjonc and Villa Bambino. 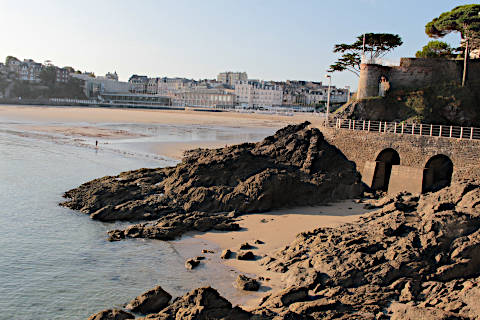 If you go down the stairs from near Villa Cézembre, the coast path that returns to Dinard centre along the edge of the Pointe de la Malouine has lovely views as you approach the town.

Before returning you can first follow the coast path further to the west if you have the time. This path is popular with joggers in the morning, so a good place to start the day with a bit of exercise!

Dinard is one of our favourite French seaside resorts: see the Dinard guide. Another promontory can also be explored with a coast path that leads from the large open air pool at the east end of the beach to the port area further to the east: see Pointe du Moulinet.

To the south of Dinard you can visit the pretty village of Saint-Suliac and the historic town at Dinan.

Map of Dinard Pointe de la Malouine and places nearby