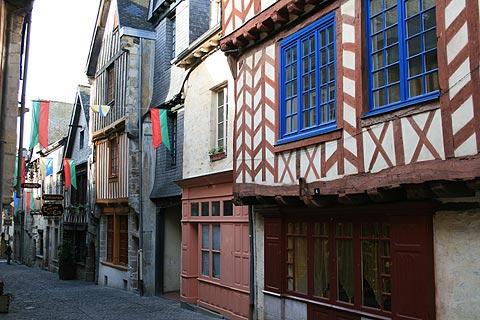 Ille-et-Vilaine is most visited for the Emerald Coast and the lovely historical towns such as Dinard, Vitré and Rennes - but be sure to also find the time to explore the rich local history, with legends of King Arthur, prehistoric monuments, medieval castles...

The Ille-et-Vilaine department extends inland from the northern coast of Brittany around Saint-Malo and Dinard to the Pays-de-la-Loire region to the south - hence it is a predominantly inland region of eastern Brittany (with less coastline than the other Brittany departments). Rennes is the department capital.

The coast in Ille-et-Vilaine - referred to as the Emerald Coast - extends from the picturesque coastal town of Dinard in the west to the famous abbey and island at Mont-Saint-Michel in the east (itself just across the border in Normandy and the most visited destination in France).

Just west of Dinard the resorts at Saint-Lunaire and Saint-Briac-sur-Mer are also popular with visitors.

Saint-Malo: Often overlooked by visitors because of its role as a ferry terminal town, Saint-Malo has a very extensive historical centre with extensive ramparts and is a lovely town to explore. The aquarium in Saint-Malo is very popular - it is the most visited tourist attraction in the Ille-et-Vilaine department - and close to the town you can also visit the Theme Park at Cobac Parc.

Just a few kilometres from the coast we recommend you visit the attractive small town of Dol de Bretagne which has a very interesting medieval centre.

Close to Dol-de-Bretagne there is a village and hill called Mont Dol (a slightly deceptive name - it's not really a very high hill) from where you have nice views across the bay of Mont-Saint-Michel.

The port town of Cancale, a few kilometres north-east of Saint-Malo, is the most northern town in Ille-et-Vilaine and well known for the quality of the seafood restaurants. After eating we recommend a coastal walk along the scenic Pointe du Grouin headland just north of Cancale.

The Rance River that follows the north-west edge of Ille-et-Vilaine to Dinard (and is in part within the Cotes d'Armor department to the west) is a very scenic route to explore - by road is possible, by boat is even better. You might like to combine the trip with a visit to the zoo at Pleugueneuc. The pretty fishing village of Saint-Suliac sits on this estuary and is one of the "most beautiful villages of France".

Continuing south, the riverside town of Combourg is in a pleasant setting overlooked by a castle and book lovers will want to visit Becherel, a pretty village with numerous bookshops to the south-west of Combourg.

Further east you can explore the pretty town of Fougeres with its renowned castle and medieval centre. Also in the east the Villecartier Forest is an attractive destination for walking and cycling, as well as more active pursuits on and around the lake.

Close to Fougeres we also suggest a visit to the small town of Saint-Brice-en-Coglès.

We came across the Jardin Botanique de Haute-Bretagne just north of Fougeres almost by chance and were very glad we had - it is a very extensive area of parkland and gardens with a great deal to see and numerous different types of garden in a lovely setting.

A little further south in the centre of the department you will find the impressive town of Rennes , which has many medieval and other historical buildings and is very interesting to explore. The Museum of Fine Arts in the town is also quite impressive if the weather is less than ideal!

About 35 kilometres east of Rennes you must also be sure to visit the lovely town of Vitré, which we would include as one of our favourite medieval towns in France.

This is the least visited region of Ille-et-Vilaine but still has several interesting highlights.

Places of interest in the south-east of Ille-et-Vilaine include the town of Chateaugiron, dominated by its medieval castle, the small village of Champeaux with its imposing medieval church and the historical centre of La Guerche-de-Bretagne.

I'm not sure how many times I've set off to visit dolmens (prehistoric monuments) in France and been disappointed to find little more than a couple of stones leaning on each other...well that isn't the case at the Roche-aux-Fées (at Essé) which is a very substantial monument, perhaps the biggest dolmen I've seen in France.

If you have a taste for Arthurian legend and history you will enjoy a visit to Paimpont and the Broceliande Forest to the south-west of Rennes.

At the southern border of Ille-et-Vilaine, the attractive port town at Redon is very picturesque (note: Redon is a river port, being at the confluence of the Oust and Vilaine rivers, not a coastal port), and we also enjoyed a stroll around the village of Langon, east of Redon - note the very unusual church with its multi-spired steeple.

Map of Ille-et-Vilaine and places nearby