Saint-Suliac is a lovely village which sits on the banks of the estuary of the La Rance river, between Dinan and Dinard in the Ille-et-Vilaine department of Brittany. Saint-Suliac is classed as one of the "most beautiful villages of France"

France This Way comment: Saint-Suliac is a charming village with a historic centre, a riverside promenade and an ancient church among its attractions and a visit is recommended when you explore this part of Brttany

The lovely granite houses on the edge of the water and elsewhere in the village are absolutely charming. Many dating from the 15th to18th century, most of the houses have painted shutters, a small but picturesque garden and often some sea-related ornaments such as ropes, nets, small boats and nautical colours. On the water small boats add to the picturesque view. 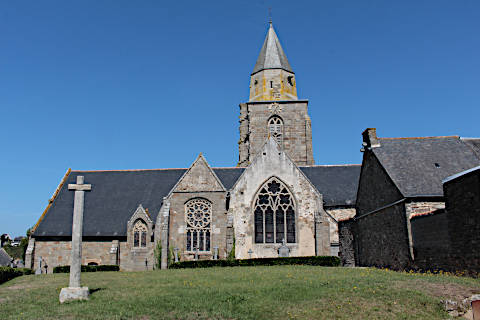 The centre of Saint-Suliac is quite small, with several lanes to explore. As well as the houses and gardens you will also notice a 19th century well and if you follow the Rue des Besnières, the road where linen sails were originally made, you reach a statue of the Virgin on a raised hillock.

Throughout Saint-Suliac you willl notice statues in the walls of the house. Many of these are 19th century statues of the Virgin, added to protect the villagers from diseases such as cholera, and others are sculptures from an ancient monastery a short distance from the village.

There is an attractive 13th century church in the centre of Saint-Suliac which is quite sombre but pleasant inside and one of the oldest churches in Brittany - it was built to replace an 11th century church, of which only one door now remains. It is surrounded by a walled churchyard (or enclos paroissial) which was common to churches in Brittany at one time but is now quite rare.

The churchyard is entered through ancient stone entrances called triumphal arches that have been here since the 13th century: they are identical and it is thought they were originally the entrances to an ossuary.

The bell tower of the church is a fortified tower that was once part of the town's defenses, and you can see several stone statues in the porch of the church.

The churchyard was the site of a terrible battle on August 30 1597, at the end of the Wars of Religion.The church was providing shelter for the inhabitants of the village when it was invaded by an army of 800 soldiers at the same time as a bombardment from the sea took place - none of the 250 villagers survived.

The promenade along the Rance is also pleasant, and you can see traditional boats as well as more granite houses. The cafes on the banks of the Rance are a good place to enjoy a coffee or a snack.

When you have finished exploring the village take a walk or drive up to the Virgin of Grainfollet statue high above Saint-Suliac and enjoy the panoramic views over the estuary and village. The estuary is home to a great number of birds and is a popular spot for bird-watchers. There are also many hiking trails for walkers to explore. 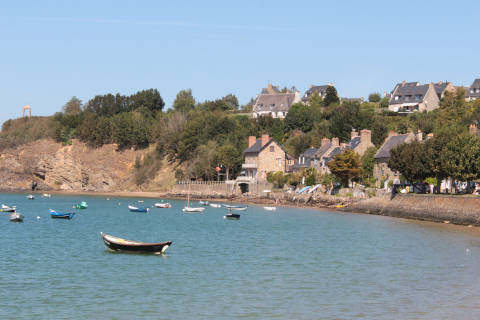 The Rance Estuary Barrage is 750 meters long and is an impressive sight a few kilometers north of Saint-Suliac. There is a discovery centre at the barrage, the 'Maison de la Rance Discovery Centre'  with information about the natural environment of the estuary.

Nearby is a menhir known as the "Dent de Gargentua' or 'Tooth of Gargentua', which is evidence of a Megalithic civilisation in the region.  At the rock-shelter of Grainfolet around 6000 artefacts have been found dating back to Paleolithic times, around 70 000 years ago. These were all arranged around a fireplace.

There are the remains of a 10th century Viking camp nearby which are most visible from the sea in a small cove south of Mont-Garrot.

The Rance estuary is between the medieval town of Dinan and the Emerald coast between the seaside towns of Dinard and Saint-Malo. Of course the lovely medieval town of Dinan is a delight to visit as are the coastal towns of Dinard and Saint-Malo further up the estuary. Do not be fooled into thinking Saint-Malo is just a ferry harbour: it is home to a beautiful walled city and just a few kilometres from Saint-Suliac.

Map of Saint-Suliac and places nearby

Visit near Saint-Suliac with France This Way reviews

Plan your visit to Saint-Suliac, Ille-et-Vilaine

The French version of this page is at Saint-Suliac (Francais)