Dinard is on the coast of north-eastern Brittany, across the Rance Estuary from Saint-Malo. The origins of Dinard as a fishing village were transformed at the end of the 19th century when the rich and fashionable of the time built their luxury houses here.

Dinard is affected by the warm gulf stream so has an unexpectedly mild climate for the region.

France This Way comment: the combination of a sandy beach, beautiful architecture and a lively shopping centre make Dinard a very pleasant and popular resort to visit.

The centre of Dinard is the area around the main beach, the Plage de l'Ecluse, and it is here that you will find most of the shops, restaurants and hotels. To the west of here the Pointe de la Malouine is the main region for seeing the 19th century villas in the town, and to the east the port and the Pointe du Moulinet are also pleasant to explore.

The town centre in Dinard is smaller than we expected for such an important resort, but still has some interesting shops and a good choice of cafes. The main streets for shopping are between Rue Levasseur and Boulevard du President Wilson, and the tourist office is in the Place de la Republique. 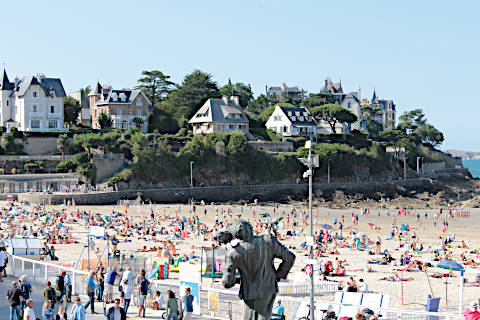 Start your visit to Dinard on the wide promenade behind the main beach. Some of the best examples of the 19th century houses can be seen along the sea-front, and there are nice views out to sea.

The town centre has a very wide range of shops, cafes, restaurants and boutiques so if the weather is not ideal for the beach you can always go shopping. We also enjoyed exploring the art galleries in the centre of Dinard - we were pleased to find that there are even some among them where the artworks are not related to the sea!

There is an impressive statue of Alfred Hitchcock next to the Plage de l'Ecluse in Dinard, installed to commemorate the 20th annual film festival in the town. Despite many claims to the contrary, there is apparently no evidence that Hitchcock visited the town or used one of the villas in Dinard during Psycho or Birds as is often claimed...

There are several pleasant beaches in the town, which are also the starting point for nice walks along the coastline, and there are other nice sandy beaches nearby. The main beach in the centre of Dinard is the Plage de l'Ecluse, where you will find the most facilities and activities. The beach huts in stripes of white and blue add to the charm of the beach.

To the west of the Pointe de la Malouine are the Plage de Saint-Enogat and Plage Port Riou, where you can see the most imposing villas, and a little further west the Plage de Port Blanc has less amenities but tends to be quieter than the more central beaches. To the south of the Pointe du Moulinet there is another beach called the Plage du Prieuré.

At the east end of the Plage de l'Ecluse there is a large round pool next to the beach that is also very popular with vistors.

We recommend you ask in Dinard tourist office for the map that suggests a route to follow through the town to ensure you see the most imposing villas and monuments.

Several other important buildings will attract your attention in Dinard, typically built in the local granite. These include the 14th century Maison du Prince Noir (House of the Black Prince), a quaint little ancient priory, and the imposing Manoir de la Baronnais dating from the 17th century.

At the east end of Rue Levasseur you reach the port for Dinard, and have views across the Plage du Prieuré and across the sea to Saint-Malo, which is just a few kilometres from here. 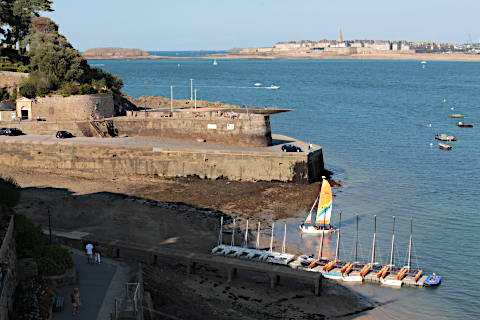 There is a daily market each morning in the Halles de la Concorde, and on Tuesdays, Thursdays and Saturday mornings there is a market in Place Crolard. During the summer (early April to early September) there is also an antiques / vide grenier market in Dinard, all day Sunday at Esplanade de la Halle.

By the end of the 19th century Dinard was considered to be France’s no. 1 seaside resort and was the place to go and be seen by the rich and famous. As a result Dinard has lots of attractive villas, and because of their very individual and eclectic style many of them are now protected buildings: these are best seen by exploring the Pointe du Moulinet and the Pointe de la Malouine.

There are more villas to be seen along the Pointe de la Malouine, and from the Pointe du Moulinet you get magnificent views of St Malo across the water. If you are passing several days in Dinard ther are various other walks that explore the area around the town including Saint-Enogat to the west and the Pointe de la Vicomte, along the coast further to the south.

Sant-Enogat is the small village around which Dinard originally formed and has its own beach, and the Pointe de la Vicomte is a promontory to the east of the port that is less developed than the town centre and also has several imposing villas. 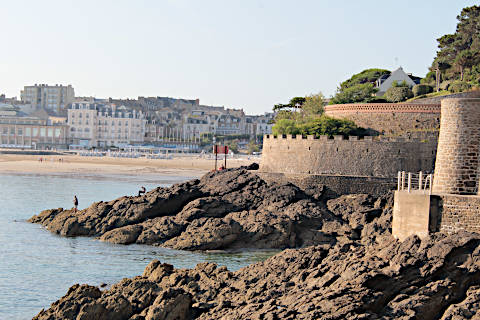 Dinard holds itself forward - with some justification - as the heart of the Emerald Coast - the attractive name given to this section of the Brittany coastline. In the port you can organise your boat trips out to sea and along the Rance river.

From here we also enjoyed a visit to Les Jardins de Montmarin on the D114 not far from Dinard. The garden is on the banks of the River Rance and is laid out with an elegant formal garden in front of an 18th century mansion and a park further away from the house.

You should also visit Dinan, a remarquable historic town a little inland at the lower end of the Rance estuary, and explore the pretty village of Saint-Suliac.

Map of Dinard and places nearby

Visit near Dinard with France This Way reviews

Plan your visit to Dinard, Ille-et-Vilaine

Regular market(s) are held in Dinard each Wednesday & Tuesday & Thursday & Saturday. (Markets are held in the morning unless stated.)

The French version of this page is at Dinard (Francais)