The Pointe du Moulinet is a promontory to the east of the main beach in the centre of Dinard, one of the most charming resorts in Brittany. The mill (moulin) that gave the promontory its name no longer exists.

France This Way comment: the Pointe du Moulinet is very pleasant to explore, with several imposing villas, beautiful views of Dinard, and a pretty coast path with views across the sea to Saint-Malo among its attractions

You can start a walk to explore the Pointe du Moulinet at the east end of the main beach in Dinard town centre, the Plage de l'Ecluse. There is a very large open air pool here, the perfect way to start or finish your walk! 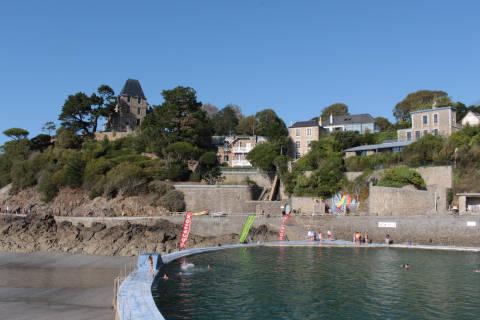 The promontory here has less villas than the Pointe de la Malouine at the other end of the beach, but those here are more substantial - and sometimes rather harder to see.

There is a footpath that follows all the way around the Pointe du Moulinet, from the pool to the pleasure port: the entire loop takes about 45 minutes to complete. The first half of the walk has views of Dinard centre as well as lovely views of the Pointe du Moulinet and its villas. The second half has views across the Rance estuary to Saint-Malo, another beautiful town that is just a few kilometres from Dinard.

The port is a recent addition to Dinard, built in the early 20th century. It is quite small and used only by small boats, but these contribute to the pretty view across the water. To reach the port in Dinard you can follow the coast south of the Pointe du Moulinet, along a path known as the Promenade du Clair du Lune.

There are several very imposing villas on the Pointe du Moulinet: 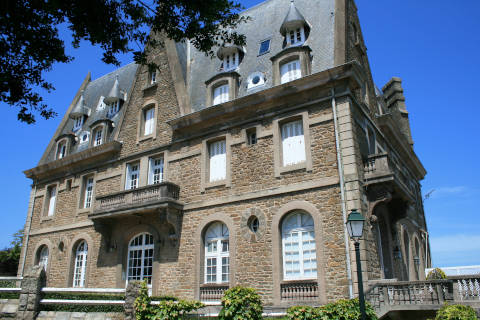 See our guide for Dinard for other highlights in the town. You will also want to walk around the promontory to the west of the beach, the Pointe de la Malouine.

If you travel south from Dinard you reach the pretty village of Saint-Suliac then a few kilometres further the historic town of Dinan is one of our favourite historic towns in France.

Map of Dinard Pointe du Moulinet and places nearby