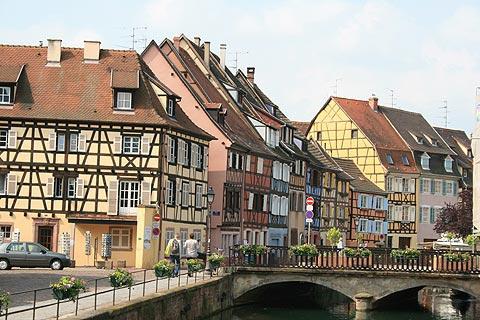 Colmar is a sizeable town in the Haut-Rhin department to the south of the Alsace region. The town has rather a lot of more recent development around the edges, but continue to the centre and you will love the old town with street after narrow street of half-timbered, half-painted houses that will show you the real Alsace as it was hundreds of years ago.

The best place to start your visit to Colmar is in the medieval old town. This historic part of Colmar Old Town has various interesting areas such as: 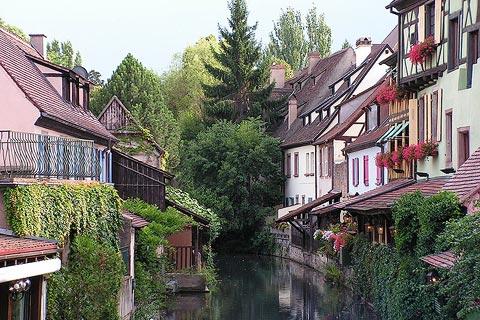 While the great appeal of the old town is simply in strolling around enjoying its overall charm, there are also a good number of individual buildings of great interest to see as you explore.

These include the Maison Pfister, built in 1537 at the corner of Rue des Merchands and especially notable for its façade, with decorative balcony and bright decorations by Christian Vacksterffer, which is an exemplary work of Renaissance art in the region of the Rhine.

Another notable building is the famous 17th century “Maison de Têtes” (“House of heads”), so named because the façade is covered with over a hundred animal heads and faces. You can also see the double “loggia” and a statue of Bartholdi.

Of course, there are numerous bars and restaurants throughout the centre of Colmar offering a very wide selection of options whether you just want a quick coffee or are stopping for lunch and a chance to enjoy the local Alsatian cuisine. Alongside the traditional sauerkrauts you can taste some typical dishes like the “fleishschnacka” (pasta of beef cooked in broth); and specialities based on fish or frog's legs.

Colmar also has two great works of art for which it is renowned: the first is the Issenheim Altarpiece by Matthias Grunewald in the Unterlinden Museum and a magnificent piece of Renaissance art; the second is the 'vierge au buisson de roses' by Martin Schongauer in the dominican church, which although less important than the Grunewald is also a highly regarded altarpiece. 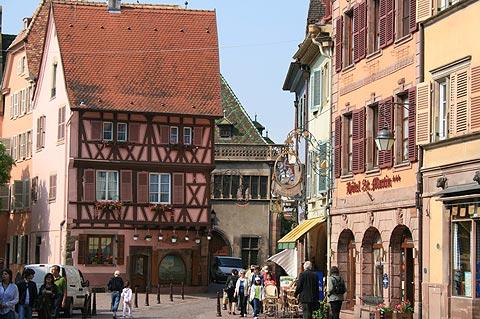 As you would expect of an important French city, Colmar has several churches of interest to visitors. One of the most interesting here is the 13th century Convent of the Dominicans with its church and cloisters. The Dominicans in Colmar played an important part in the conservation of texts and the writing of a history of the city during the Middle Ages, called the Annals of the Dominicans.

In their church you can see the well known 'Madonna of the Rose Bower' (the 'vierge au buisson de roses') painted altarpiece by Martin Schongauer, in which the artist incorporates the traditional motif of the representation of the Virgin and one of the most famous works of art in the region. You can also admire the Annunciation by Martin Feuerstein.

You should also visit the the Collegiate Church Saint Martin on Place de la Cathédrale. This church was first consecrated as a cathedral and then a collegiate church from 1237 under Frederick, abbot of Münster. The Church has a strong gothic character, three naves and beautiful stained glass windows from the Church of the Dominicans.

The church was severely damaged by a fire but was rebuilt in 1536 and served for a time as a place of Protestant worship.

The porcelain gives it special red-light and there is an impressive main portal between two columns: the portal to the South is signed by “Maître Humbert” (who began work in 1245). Also notable are the reliefs showing the 'Adoration of the Magi' and the 'Last Judgment', while in the apse there is a precious wooden crucifix of the fourteenth century.

Another religious building that displays remarkable workmanship is the Temple Saint Mathieu, an old Franciscan church built in 1234 on the site of a 9th century basilica and which contains the 'Crucifixion' by Pierre d'Andlau (born around 1420). 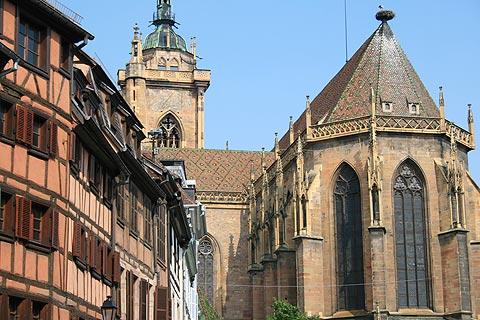 The Musée d'Unterlinden is an unmissable stop for tourists visiting Colmar. The museum occupies a space that was formerly part of the old Dominican church which, under the Gothic vaults, contains engravings and printings of great importance by Martin Schongauer (called “Beau Martin” and born in Colmar c.1450 - 1491) and perhaps the master of A. Dürer), with subjects drawn from the Passion of Christ.

Coming from the Church of the Dominicans, the work is characterized by a deep realism as you can see by the meagre faces of some of the characters. Among the 16 works in view a special mention goes to Christ Before Pilate.

In the large collection of the museum (XV-XVI century), it is also worth mentioning a 'Piety' attributed to Roger van der Weyden (1399-1464), a 'Crucifixion' attributed to Matthias Grünewald (1470 c.-1528) and, by the same Grünewald, the famous altarpiece from the church of Issenheim. 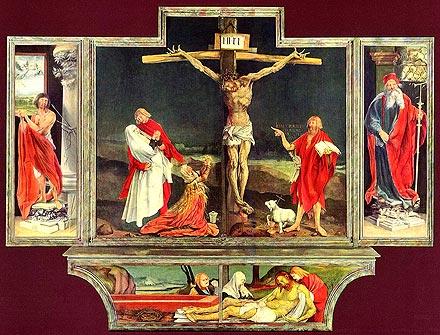 In addition, the museum contains paintings by Gaspard Isenmann (1430-1480), interesting for the realistic precision of the objects that were in daily use in the 14th century. We should also mention several works covering a wide period from medieval times to the 19th century e.g. the 15th century 'Crucifixion' by Lorenzo da San Severino.

Contemporary art is well represented in the Musée d'Unterlinden with works by August Renoir, Claude Monet, Pablo Picasso, Fernand Leger and others.

Another interesting museum in Colmar is the Musée Bartholdi. Bartholdi, creator of the Statue of Liberty in New York, was born in Colmar and the museum keeps a resin copy together with other objects and plastic models. One hall of the museum is reserved for Jewish art.

A very curious and interesting museum for both children and adults is the Museum of Toys and Trains, with various examples of toys of the past and the copy of a village with moving model trains. Other colmar museums include the Albert Schweitzer Museum (Rue Münster), and the Museum of Natural History and Ethnography.

Colmar is on the Alsace Wine Route which is a very popular way to explore the villages and vineyards of this part of Alsace.

Map of Colmar and places nearby

Visit near Colmar with France This Way reviews

Plan your visit to Colmar, Haut-Rhin

Regular market(s) are held in Colmar each Wednesday & Thursday & Saturday. (Markets are held in the morning unless stated.)

The French version of this page is at Colmar (Francais)