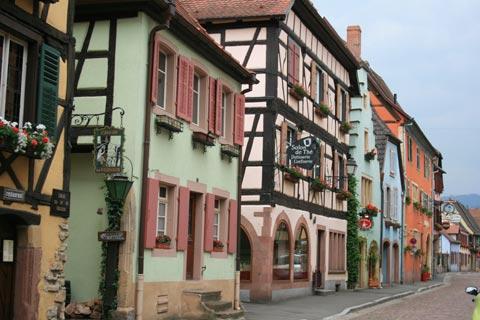 Turckheim is two kilometres west of Colmar at the base of the Vosges mountains, in the Haut-Rhin department of the Alsace region. With origins dating back to Roman times, Turckheim is another of the lovely towns on the Alsace wine route that is well worth a visit.

The main pleasure of a visit comes from strolling along the cobbled streets in Turckheim, lined with brightly coloured half-timber houses. En-route you can admire its three fortified gateways and remaining parts of its ramparts.

A good place to start your visit is in the main square in Turckheim which is very attractive with its fortified gate, a lovely 16th century building which is home to the tourist office, and a selection of pretty half-timbered houses.

You should then wander along the 'Grand Rue' to see more of these attractive half-timbered houses and lots of wine houses offering tastings (degustation). 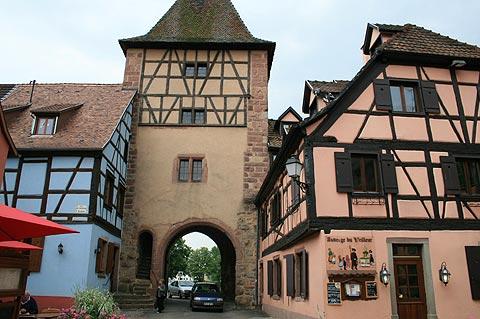 Throughout the centre of Turckheim there are plenty of traditional Alsace style houses to admire, overflowing with flowers, and a few specific buildings of interest: mostly dating from the 16th and 17th century these include the town hall, the hospital and the guard house.

Perhaps the most notable feature in the town is the fortifications and the three original gateways that surround the old town. While these defences are common in some parts of France they are very unusual in the Alsace region.

On one of the towers, the Porte Basse, you can see a large sundial while the tower at the end of Rue des Vignerons is a more simple style and the Porte du Munster is simple except a small clock.

Among other interesting sights in Turckheim be sure to take a look at the richly decorated 'Ancienne Auberge a l'Aigle', which dates back to 1621, and the fountain in Place Turenne with a small statue of Madonna that was added in the 18th century.

Turkheim also has a particularly impressive old peoples home which is housed in an 18th century 'ancienne propriété'.

Another interesting architectural feature on several of the houses in Turckheim is the ornate stone oriel windows (a sort of 16th century bay window on one of the upper levels of a house) such as those at 14 Grand Rue, 4 Rue Wickram and on the Maison de Commerçant at 1 Rue du Conseil. 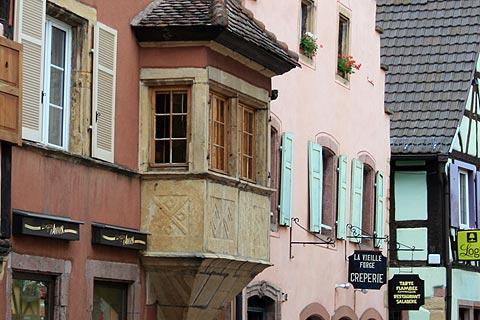 Although it appears quite indistinctive because of the brightly coloured houses in Turckheim you should also take a look at the Church of Saint-Anne with its gothic style belltower and baroque facade. In particular note the lovely tiled roof on the church tower which gleams in the sunlight.

While exploring the village centre you should also keep an eye out for storks. I spotted two nests during my visit, one on one of the fortified gateways and one on a tall building near the church.

During the summer months a 'traditional nightwatchmen' makes the rounds of Turckheim each evening, a popular event as he sings his way around the town, followed 'Pied Piper' style by visitors to the village!

Turckheim is on the eastern border of the Natural Regional Parc of the Ballons des Vosges, an extensive natural area of rolling hills that is popular with hikers, cyclists and nature lovers.

The village is also on the Alsace Wine Route, a route that includes many picturesque and traditional Alsace towns and villages and is a popular way to explore the region.

Map of Turckheim and places nearby

Visit near Turckheim with France This Way reviews

Plan your visit to Turckheim, Haut-Rhin

Regular market(s) are held in Turckheim each Friday. (Markets are held in the morning unless stated.)

The French version of this page is at Turckheim (Francais)