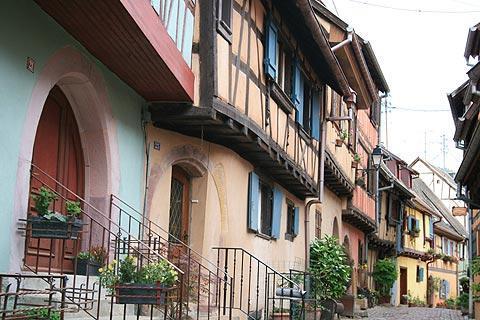 Eguisheim is near Colmar in Alsace, in the Haut-Rhin department of north-east France. In fact Eguisheim is now almost a part of Colmar, but historically it is a separate town, and it has its own separate identity.

The winding, cobbled streets of Eguisheim are lined with traditional medieval half-timbered buildings, brightly painted as are many of the buildings in Alsace. There are also fountains, flowers and ...the storks for which the town is well known.

It is of course because of this charm that Eguisheim is now listed as one of the most beautiful villages of France. The village is also holder of the prestigious 4* ville fleuri award (the highest award) for its town garden planting and is full of flowers in the summer. 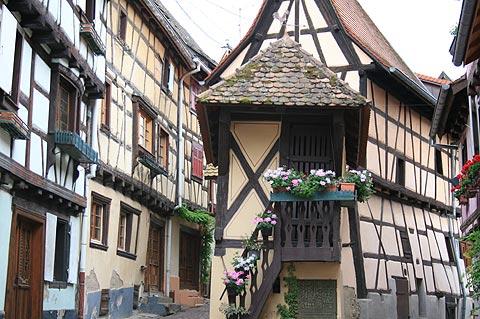 France This Way comment: there are many lovely villages here in Alsace, especially in the summer when all the flowers and gardens liven up the streets, and Eguisheim is one of our favourites among them. A visit is recommended when you explore Alsace!

Start your visit by wandering along the Rue du Rempart Sud - as soon as you reach the entrance to the street you see a charming dovecote that brings a picture postcard beauty. The narrow street follows the line of the former moat around the town and is lined with brightly coloured, higgledy-piggledy houses. It is possible to circle the whole medieval centre by walking along here.

Next walk up the Grand Rue in Eguisheim where you can see a selection of manor houses, inns and other houses all painted the blues, yellows, pinks and greens so typical of Alsace. A little further along and you will reach the Place du Chateau with its chateau, church, colourful houses, fountain and ... storks!

Storks: I had been exploring Alsace for several days before I got to Eguisheim and these are the first storks I had seen, although they are the most famous 'trademark' bird of the region, although continuing south through Haut-Rhin I did see more.

There are two nests in Eguisheim and a Stork Sanctuary on the edge of the village where they are hoping to breed and re-introduce storks to the region. You can see the storks and their nests on top of the chateau and on top of the Church of Saint-Peter and Saint-Paul.

There are lots of small delights that you will come across as you explore the town including the 8th century Eguisheim castle, birthplace of Pope St Leo IX (1002 - 1054) and with an outer wall that dates back to 720 AD (a classified historical monument).

The little church next to the chateau has a very colourful interior: originally many churches were brightly painted like this but with time the paint has worn off and been cleaned back to stone. 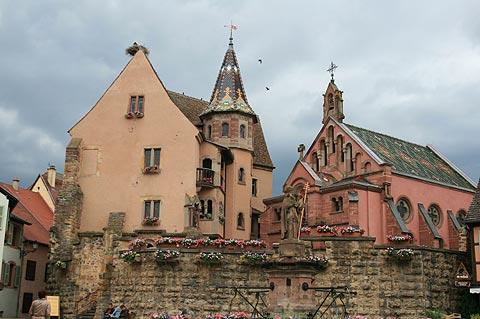 There are lots of colourful manor houses in Eguisheim: the Unterlindenhof dates back to 1051 and others to between 1200 and 1600. As a reminder that life was once very different in Eguisheim you will also see the 16th century leper house!

Other notable historic features in Eguisheim include two Renaissance fountains and the Church of Saint-Peter and Saint-Paul which has both Romanesque and Gothic architectural elements.

You will also find plenty of bars, restaurants and accommodation in Eguisheim which make this a good base for exploring the region, and a pleasant chance to enjoy the ambiance of the town centre during the evening.

Don't forget to try the local wine during your visit - the wines of Alsace are very highly regarded, and Eguisheim is one of the centres of this important local activity.

Above Eguisheim you can see the vestiges of three castles dating from the 10th-12th centuries: Le Wahlenbourg, Le Dagsbourg, and Le Weckmund. In addition to these, the 'Route des 5 Chateaux' also visits Le Hohlandsbourg (newly restored) and the donjon at Pflixbourg (reputedly haunted, so beware!). 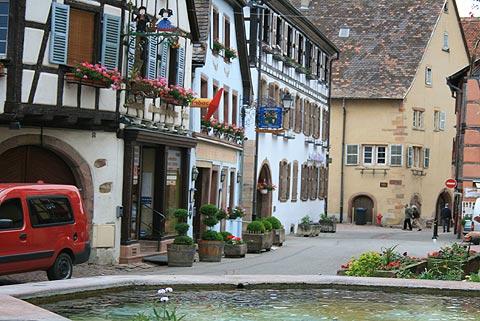 You will also come across the town if you are following the Alsace Wine Route, which is a very popular way to explore the villages and vineyards of the region.

Map of Eguisheim and places nearby

Visit near Eguisheim with France This Way reviews

Eguisheim has received the following tourist classifications: one of the most beautiful village in France (plus beau villages); village in bloom (ville fleurie) 4*

Plan your visit to Eguisheim, Haut-Rhin

The French version of this page is at Eguisheim (Francais)