Chateau de Hautefort is a castle built on a rocky promontory 40 kilometres east of Perigueux, overlooking the valleys of the rivers Beuze and Lourde in the north-east of the Dordogne department.

One of the most remarkable châteaux in the Dordogne it is now a listed historical monument and is often claimed to be the most beautiful chateau in the region. 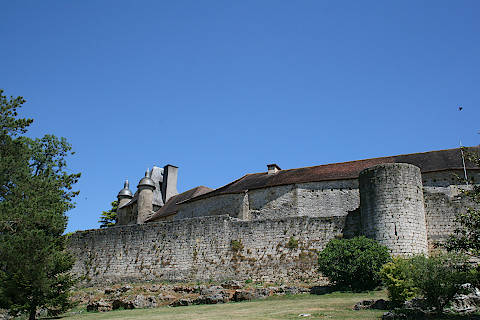 During the 12th century the medieval fortified castle here was a centre of the struggles over royal succession and control that frequently dominated France in the early middle ages. By the end of the 16th century the military capabilities were no longer required, and work started on converting the castle into somewhere more comfortable for living in.

Work on the castle really got underway during the 17th century when the Chateau de Hautefort was transformed  into more of a 'renaissance palace', which is essentially the castle we can visit today. The transformations were in part carried out by the Marquis de Hautefort for his sister, mistress to King Louis XIII, and also involved removing much of the defensive fortifications of the castle.

During the course of the 20th century the Baron and Baronness de Bastard spent 30 years from 1929 to 1959 restoring the chateau, only to see it severely damaged by fire just after the works ended, in 1968. Despite the loss of most of the contents and damage to the structure, the Baronness started again (the Baron de Bastard having passed away) and renovated the castle a second time.

From the outside the castle is very elegant, and apart from the two round towers, some sections of defensive wall, and the drawbridge by which the castle is entered, there is little to remind us of the medieval castle. The building we see now is very much in the classical style of the 17th century, with lots of windows and roof ornamentation, and more like the castles we expect to see in the Loire Valley than the Dordogne.

Inside, Hautefort contains many luxurious salons and bedrooms, furnished luxuriously with interesting 17th century paintings, tapestries and items of furniture from the 17th and 18th centuries. The Chateau de Hautefort is equally well known for, and visited for, its meticulous 'French style' gardens and the carefully landscaped parkland that surrounds it.

The castle is open every day from April to October, and weekends and bank holidays during March and November, admission price 8.50 euros. 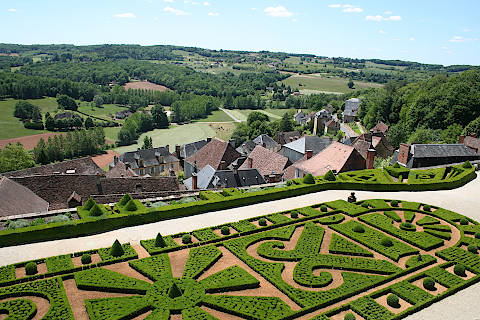 You will also want to take a stroll around the small but picturesque village of Hautefort that surrounds the castle and contains a 17th century hospice, now a small museum of medicine, and also Hautefort Tourist Office.

A pretty village quite close to the castle is Saint-Robert, listed among the 'most beautiful villages in France'.

Note: the most beautiful castle in the Dordogne perhaps, but Chateau de Hautefort is not the most visited - that distinction belongs to the Chateau de Castelnaud and its Museum of Medieval Warfare. See more Dordogne castles.

Map of Chateau de Hautefort and places nearby

Visit near Chateau de Hautefort with France This Way reviews