Tourtoirac is a small village in the north-east of the Dordogne department, to the east of Perigueux and just a few kilometres from Hautefort and Excideuil. The river in the village is the Auvézère, that flows into the Isle then later into the Dordogne river.

France This Way comment: although Tourtoirac is certainly small and will not take you long to explore, the village centre with the abbey church and the area next to the river are pleasant and the caves are impressive so the village merits a visit if you are nearby. 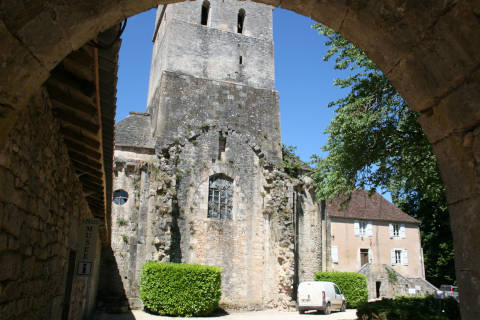 The main monument here is the Church of Saint-Pierre-ès-Liens, a roman style church built from the 12th century and once part of an abbey complex. This is the main part of the abbey that remains today, but you can also see a hall, a chapel and two towers from this early period as well as the fireplace in the wall just to the right of the main entrance.

The church in the village is also slightly unusual: as you can see in the main photo, the church has a belltower at the front that is very traditional of ancient churches in the region, and also a square belltower at the rear of the church above the apse. The apse is unusual in having a clover-leaf style series of chapels around the apse, although one of these has now been lost. These two towers dominate views of the village from the surrounding countryside.

Inside the church is not in great condition, but around the wall of the choir section you can see some of the original carvings of faces, capital stones and columns. Further carved stones can be seen in the hall (the salle capitulaire).

After exploring the church and the rest of the centre of Tourtoirac you can take a stroll next to the river, which is a charming part of Tourtoirac. Pleasant to visit in the summer, the river Auvézère sometimes takes on a different character in the winter and spring after heavy rain, when flooding in the lowest part of the village sometimes occurs.

On the edge of Tourtoirac you can see (but not visit) a lovely manor house called the Manoir de la Farge.

There is a cave system open to visitors here called the Grotte de Tourtoirac. The caves were only discovered in 1995, then opened to the public in 2010. The path through the caves is around 300 metres long and has a good number of stalactites and stalagmites, which have been lit nicely to make the visit more atmospheric.

I should say, we had visited the region a few times before we discovered these caves and are glad we did: they deserve to be better known in this region. We have also been assured that the Grotte de Tourtoirac is acessble to wheelchairs, which is very unusual for a cave system!

The closest towns to here are Thiviers and Excideuil (both to the north-east of Tourtoirac), and both of them are pleasant small market towns to visit.

One of the most important castles in the Dordogne department is also close to the village at the Chateau de Hautefort.

Map of Tourtoirac and places nearby

Visit near Tourtoirac with France This Way reviews

Plan your visit to Tourtoirac, Dordogne

The French version of this page is at Tourtoirac (Francais)