Excideuil is a market town towards the north of the Dordogne department, about 30 kilometres north-east of Perigueux, the capital of the department. Except for market day it is a quiet town to visit, but has several points of interest if you are staying in the region.

Excideuil has an attractive town square which grew up around a 10th century monastery. All that now remains of the monastery is the Church of Saint-Thomas but this is an attractive building with doorways surrounded by carvings. These stone doorways date from the 15th century although the church itself is older and roman style.

Start your visit in this square, the Place du Chateau, where you can visit the Excideuil tourist office. They can give you a leaflet with the main highlights indicated. These are all close by in the oldest part of the town, called the Bourg Saint-Thomas. 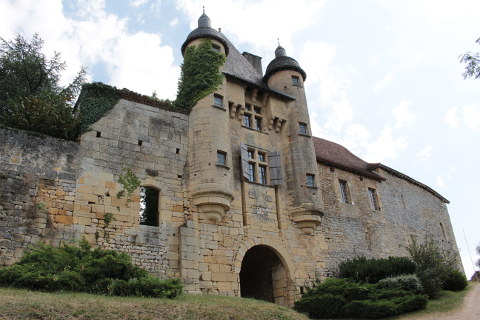 Surrounding the church there are lots of impressive buildings, some of which date back to the 16th century and many are from the 17th and 18th century. During this time Excideuil was exempted from paying tax and had a thriving iron mining industry, so lots of imposing houses were built for the wealthy mine owners and traders who came to the town.

The castle in the town is set high on a rocky promontory, and successfully repelled Richard the Lionheart on three different occasions. The castle was originally built in the 13th century but was renovated and converted many times over the following five centuries so now includes various different styles and incorporates medieval defences as well as later modifications to make the castle more habitable and comfortable.

Although the main castle is not open to the public it can be admired from the outside, and is an impressive sight with the cliff and gardens below.

Excideuil also has a hospital which is thought to date back to the 12th century when it was a convent, and one of the oldest buildings in the region. Other small highlights include a stone market hall and the Bugeaud fountain.

The market hall was built in its current location in the early 20th century, having been moved here from elsewhere in the town during changes in the town layout. It had only stood in the earlier position for about 50 years, having been built in 1870 to replace a medieval hall which had fallen into disrepair and been demolished. 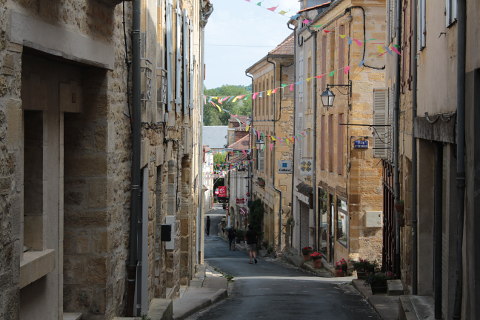 Market day is Thursday and this is a particularly good day to visit the town: the Excideuil market is one of the best in the area.

Excideuil is in the northern part of the Dordogne department in attractive rolling countryside with the Perigord-Limousin Natural Park a little way to the north.

It is close to the Chateau de Hautefort which is one of the most impressive chateaux in the Dordogne department. The Chateau de Jumilhac is also nearby and is another very attractive castle.

The recently discovered Grottes of Tourtoirac are also nearby and these contain an impressive display of stalactites and stalagmites. Tourtoirac is an attractive village to the south of Excideuil with the remains of an attractive abbey.

Map of Excideuil and places nearby

Visit near Excideuil with France This Way reviews

Plan your visit to Excideuil, Dordogne

Regular market(s) are held in Excideuil each Thursday. (Markets are held in the morning unless stated.)

The French version of this page is at Excideuil (Francais)