The Chateau de Castelnaud is an imposing castle towards the south of the Dordogne department, in the village of Castelnaud-la-Chapelle, one of France's 'most beautiful villages'.

France This Way comment: Chateau de Castelnaud is a very impressive medieval castle in a picturesque setting on the side of a hill, and is also much loved by children because of the recreations of medieval weapons

The Chateau de Castelnaud has been extensively restored over the last few decades and is now the most visited castle in the south-west of France: there is much to enjoy in a visit.

Built originally in the 12th century, the castle faces Chateau de Beynac across the Dordogne River. The castle has had a very turbulent history. It first saw action during the during the Albigensian crusade under Simon de Montfort against the cathars, when the castle belonged to Bernard de Casnac, a cathar. 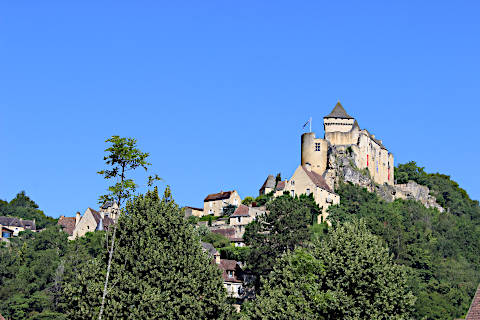 In 1214 the castle was seized from de Casnac, who then regained it a year later and hanged all members of the occupying garrison. He was then driven out again, this time by the Archbishop of Bordeaux, who ordered the castle be burned. Rebuilt in the 13th century, during the Hundred Years War after 1337 Chateau de Castelnaud was in the hands of the Caumont family and part of English ruled Aquitaine, while the Chateau de Beynac was part of France.

Frequent battles meant the castle changed hands several times between the English and the French, resolved only by a final French siege in 1442. The Hundred Years War was to continue until 1453, after which the Caumont family regained ownership of the castle which was again repaired and substantially reinforced. Much of the castle we see today dates from this period.

The Caumont family ruled the region brutally, and although they chose to side against the catholics during the Wars of Religion the family was too feared for anyone to launch an attack on the castle. The medieval castle was unsuitable for everyday living accommodation and the family built and lived in the Chateau des Milandes a little way to the south, although they continued to maintain and improve the chateau de Castelnaud at the same time.

As with so many castles in the region (and elsewhere in France), the castle fell into disrepair and abandon during the 17th and 18th centuries. This damage and neglect was worsened by the French Revolution and by the end of the 18th century it was a derelict ruin.

Now in private ownership, the Chateau de Castelnaud has been extensively renovated in the last 35 years. The castle features all the dungeons, spooky passages and recreations of period rooms that you could hope for, and brings to mind very effectively the conditions which existed in a medieval castle.

The castle is now dedicated to explaining warfare in the middle ages with the Museum of Medieval Warfare in the castle. This museum explains some of the many unpleasant pursuits that passed for war in the 13th century, and has a wide range of medieval armoury and full-scale recreations of medieval weapons (seeing how the weapons and medieval warfare worked is the highlight of a visit).

The castle also has very good views across the Dordogne valley, the river and villages such as nearby La Roque-Gageac, and of course to the longstanding enemy at chateau de Beynac. 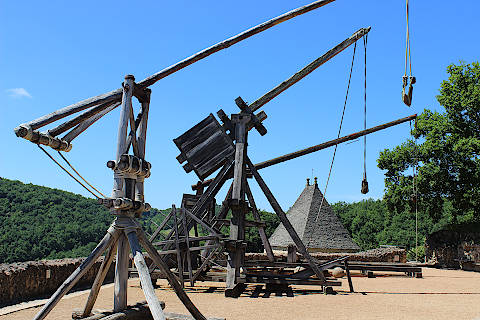 The Chateau de Castelnaud is to the south of Beynac and west of Domme which are also both classified among the 'most beautiful villages in France'. Another you will want to visit is La Roque-Gageac, a small village along the edges of the Dordogne river.

See more Dordogne castles. Another of our favourite castles close to here is the Chateau de Beynac, another beautiful medieval castle in a lovely setting.

Map of Chateau de Castelnaud and places nearby

Visit near Chateau de Castelnaud with France This Way reviews