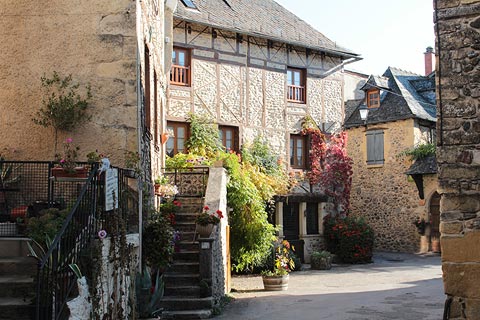 Sainte-Eulalie d'Olt is a pretty village listed among the 'most beautiful village of France' at about 30 kilometres north-east of Rodez in the Aveyron department of the Midi-Pyrenees, just one of several picturesque villages that lie on the course of the Lot River in the region.

France This Way comment: the village of Saint-Eulalie-d'Olt is small and does not take long to explore, but is very charming and one of the highlights if you are exploring along this part of the Lot river.

To preserve the charm of the historic village, visitors are asked to park at the entrance to Saint-Eulalie d'Olt. The car park is very close to the village and also on the same level so access is easy. 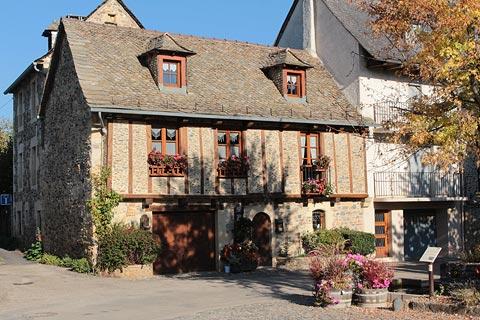 Start your visit in the square in front of the church, the principal historic monument in Sainte-Eulalie-d'Olt. Originally a substantial medieval castle occupied much of the village, but this no longer exists.

The church originates in the 11th century, and is partly roman, partly gothic style. The church contains an impressive choir section with a semi-circle of large stone columns. The church is also said to contain two of the thorns from Christ's crown in its shrine - this forms the centre of a procession through the town on the second Sunday of each July.

On one corner of the square you can see a building that was the school for Saint-Eulalie d'Olt in the 18th century and is now a small museum dedicated to a local artist called Marcel Boudou.

On the north edge of the Place de l'Eglise you can see the Lot river, and a stone pillar that is said to be all that remains of a roman bridge that once stood here but has now been destroyed by floods. If you turn left and walk along the riverside you reach a small barrage - cross this and take the path along the stream that converges with the Lot river. When you reach the 17th century mill you can again cross the stream and return to the Place de l'Eglise.

The current castle in Sainte-Eulalie-d'Olt was built in the 15th century and has a very ornate facade with decorative windows and stone carvings (the castle itself is not open to the public).The castle stands in the position of a stables of an older castle and the arch that leads to the centre of the village was part of the original fortifications for the village.

Opposite the castle is another grand building, a town house dating from the 16th century and also with interesting stonework and a decorative corner tower that contains a spiral staircase. The renaissance style windows are rather hidden behind a profusion of plants but very lovely all the same!

As you explore the narrow medieval streets around the square you will see several other interesting ancient buildings including a good number of 16th century houses: the village centre is quite small but you will find many historic features of interest such as balconies, towers and renaissance style windows.

The village is also interesting because several artisans have established workshops here such as jewellers, glass blowers, ceramics and artists. There are also several small cafes in Saint-Eulalie d'Olt, giving you the perfect excuse to prolong your visit! 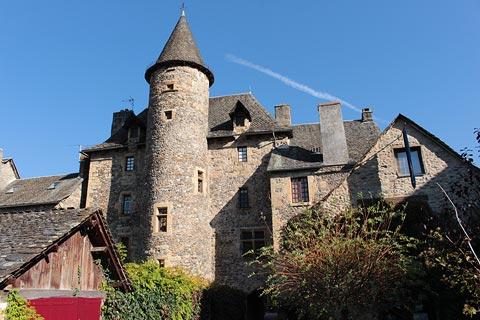 On the river to the east of the village you can rent canoes and small boats. Most local attractions are found along the course of the Lot river and the little Serre River. Of particular interest are the watermills along the Serre, including Les Douzes (where the Serre emerges from the ground), Les Foulons, and the recently restored mill in Sainte-Eulalie-d'Olt itself.

Following the river Lot downstream you will find numerous small villages and hamlets of interest with Cabanac just west of here, then Saint-Come d'Olt, Espalion and Estaing...last time we visited Sainte-Eulalie-d'Olt it was autumn and we arrived along the road from Espalion through forests of autumn foliage - beautiful!

The scenery along the Gorges du Tarn to the east, including villages such as Saint-Chely-du-Tarn and Sainte-Enimie, is also very highly recommended

Map of Sainte-Eulalie-d'Olt and places nearby

Visit near Sainte-Eulalie-d'Olt with France This Way reviews

Plan your visit to Sainte-Eulalie-d'Olt, Aveyron