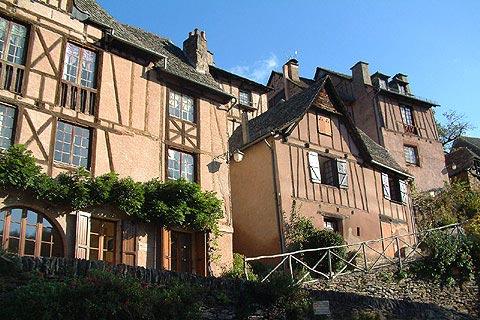 It is the countryside of the Aveyron that best defines its character - not mountainous yet never flat, with deep green valleys falling between forested hillsides hiding rivers and villages unchanged with the centuries - except for the extensive Aubrac plateau to the north-east, a remote and dizzyingly large area that stretches as far as the eye can see and has its own particular charm and beauty 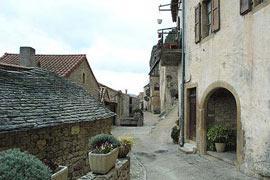 The Aveyron department is the most north-easterly of the departments within the Midi-Pyrenees region. This is quite a long way from the Pyrenees mountains, in case the name confuses you - the department actually falls within the hilly southern reaches of the Massif Central region of central-southern France.

Aveyron is home to ten of the listed "most beautiful villages of France", the highest number for any single department in the country. There are also two 'Great Sites of the Midi Pyrenees' (Conques and the Millau Viaduct), six bastide towns, and a substantial part of the Regional Natural Park of the Grands-Causses.

Because of the large area of the Aveyron department and its different character according to where you staying we have separated our coverage into 'north' and 'south':

The north-east of the department includes the Aubrac plateau, an extensive raised plateau that spreads into the neighbouring departments. Although at quite a high altitude the plateau is not mountainous but rather flat and undulating, and quite a harsh environment although one that is also known for the wide range of flora and fauna it contains.

As you explore the Aubrac region you will see the distinctive Aubrac cows with their sandy-coloured hides, fine horns and dark eyes.

The village of Saint-Chély-d'Aubrac is among the most interesting in the Aubrac region, and along with the nearby villages of Prades-d'Aubrac and Condom-d'Aubrac is a good base for exploring this wild yet beautiful environment.

In north-west Aveyron to the west of the Aubrac region there are several particularly attractive villages. Highlights among them are certainly Conques, with its abbey and picture postcard setting (and one of our favourite villages in France) and Belcastel, a quiet village in a lovely riverside location a little further south. The Chateau de Bournazel is a renaissance style castle close to here (unusual in southern France).

Other 'classified most beautiful' villages to visit in northern Aveyron include Estaing, and the nearby villages of Saint Eulalie d'Olt and Saint Come d'Olt - each of these villages has its own particular appeal and all merit a visit (although less beautiful than Conques and Belcastel, so you should give priority to those!)

Around Entraygues to the north you can explore the scenic region referred to locally as Carladez - best known for the Truyere Gorges and the lakes and dams that comprise the landscape.

To the north-west of Aveyron be sure to visit the remarkable ruins of the vilage and castle at Peyrusse-le-Roc, in a quite remarkable position set high on a rock above the trees.

There are also two other sites that we recommend you visit in the northern Aveyron:

1) the Forge de Laguiole who make the most amazing knives. The likes of Barrack Obama and Nicolas Sarkozy are proud owners of these knives but although some reach very high prices there are some lovely affordable knives too. The building and some of the knives were designed by Philippe Starck.

2) the Poterie du Don near Entraygues-sur-Truyere where Suzy Atkins makes and showcases her work and she also exhibits potters from around the world. Even the building has won awards for its design.

The centre of the department focusses around the market town of Rodez, while another highlight to the west is Najac which is a 'most beautiful village' as well as a bastide town.

Suggestion: visit the curious Trou de Bouzouls, a 100 metre deep natural ravine that divides the village of Bouzouls in two (near Rodez).

Other bastide towns in this central area of Aveyron are Sauveterre-de-Rouergue, Villefranche de Rouergue, La Bastide l'Eveque, Rieupeyroux and Villeneuve d'Aveyron, all of them quite quiet local towns with their own particular points of interest.

Exploring south-east Aveyron you will find yourself in the extensive Regional Natural Parc des Grands Causses, with the open hilltops, rolling countryside, and craggy rocks and cliffs that best define this attractive region which is centred around Millau.

A suggested starting point for your explorations of the parc is the area near Montjaux, a few kilometres west of Millau.

When close to Millau be sure to see also the renowned new architectural masterpiece and the highest road bridge in the world at Millau Bridge. A consequence of the tourist activity around the bridge is that the town of Millau is also now a popular travel destination.

The parc changes in characteristics as you cross it, passing from steep forested slopes and valleys, to the red landscapes of the 'rougiers', then on to the 'avant-causses' and the emergence of the rocky landscapes, before reaching the four causses themselves - high altitude plateaus with great gorges and rock formations and many very scenic locations.

A notable scenic highlight here is the Chaos de Montpellier-le-Vieux, an extensive area of unusual rock formations with views across the Gorges de la Doubie near La Roque-Sainte-Marguerite.

There are numerous small villages scattered throughout the region, many with their own particular appeal. Among the most attractive are Peyre, Severac-le-Chateau and Brousse-le-Chateau.

Another personal favourite is the picturesque village of La Couvertoirade, north of Lodève and in the south-west corner of the Aveyron department.

In the far south of the department and back in the Cevennes National Park you can enjoy a visit to the medieval centre of Belmont-sur-Rance and explore the Monts de Lacaune and the Gorges du Rance.

Food and wine lovers will be pleased to learn that Aveyron also has five Michelin-starred chefs, four wine producing regions and three famous cheeses (Roquefort, Laguiole and Bleu des Causses) - so even here in the countryside you should have no problem finding good food!

For the enthusiastic cyclist there is a 7 day cycle route which takes in all of the 'most beautiful villages' on its 700km route, and of course there are numerous trails and routes available for those hikers and cyclists who prefer something a little less challenging, wherever you are staying in the department.

Map of Aveyron and places nearby