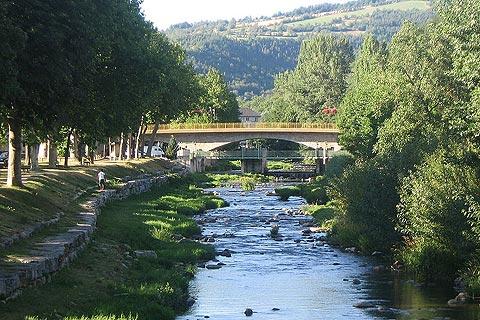 Marvejols is found in the Lozere department, of northern Languedoc-Roussillon, near Mende in the Massif Central. A quiet unassuming town, Marvejols well deserves a visit if you are in the region.

The three substantial stone entrances to the town remain as witness to these events and are the major historic monuments in Marvejols. They are the Porte Sobeyran to the north, the Porte Theron to the east and the Porte de Chanelles to the south of the historic city - all three are substantial with large round towers standing each side of the entrance.

In the historic town centre there are several interesting features and buildings to discover and explore - and plenty of information signs to tell you what you are looking at. Most of the historic centre of Marvejols is pedestrianised and includes the 13th century Collegiale Church of Notre-Dame de la Carce (to the west) and some attractive houses including the Hotel de Chatillon on Place Daurade and the Hotel de Prades on the Rue de la Laine.

The tourist office of Marvejols (next to the Porte de Soubeyran) have laid out a 'Henry IV' tour of the town that passes the important monuments, and in the tourist office there is also a small archaeology museum with artefacts from the region.

Marvejols is also well known for a more recent historic event: in the 18th century the so-called 'Beast of Gevaudan' slaughtered almost 100 people in the region surrounding the town, mostly children. Believed at the time to be the work of a wolf, it was several years before the killing finally stopped.

There is a statue commemorating the event in the town, while the second statue in the centre of Marvejols is of Henry IV and proudly states 'executed in Marvejols, 1954'. It was the statue that was executed, not the King!

The weekly market in Marvejols is held on Saturday mornings.

A few kilometres from the town you can visit the wildlife park, 'Les Loups de Gevaudan' (The wolves of Gevaudan), where wolves can be seen living in semi-liberty.

The other major attractions close to Marvejols include the scenic countryside of the Cevennes National Park, with the Gorges du Tarn among the most popular with visitors.

Map of Marvejols and places nearby

Visit near Marvejols with France This Way reviews

Marvejols is classified as a recommended detour town (plus beau detour)

Regular market(s) are held in Marvejols each Tuesday & Saturday. (Markets are held in the morning unless stated.)

The French version of this page is at Marvejols (Francais)