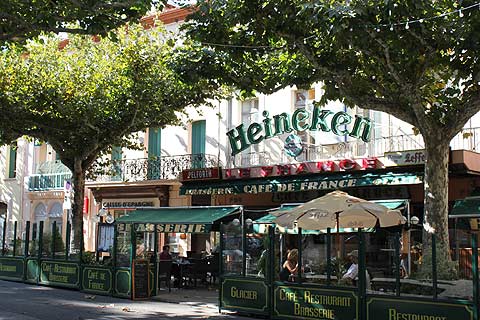 Prades is a small town in the hills of the eastern Pyrenees, to the west of Perpignan. Prades lies in the shadow of Mount Canigou, which dominates this part of the Pyrenees. Although it is the surrounding natural environmen, and the chance to explore the countryside that attracts visitors to the region around Prades, there are also some highlights to discover in the town itself.

First and foremost among Prades sights is the Church of Saint-Pierre, in the old part of the town. Above all it is the 12th century belltower that catches the attention - its three upper levels are attractively ornate with arched windows. (Note, the steeple on the top of the tower is of much more recent origin). 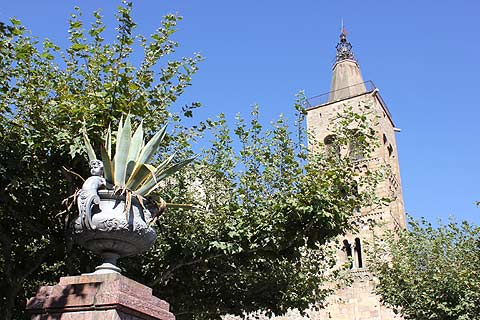 The inside of the church is also fascinating, above all for the highly decorated and glded carvings and decorations around the altar. You can see more ornate relics from the church in the associated Treasure House.

You can also see an attractive colombage house opposite the church called Maison Jacomet and recently listed as a Historic Monument, and the Saint-Martin de Canoha Chapel.

France This Way comment: we found Prades perfectly pleasant to visit but there is not a great deal to see and a visit won't take very long: we suggest it would be a nice place for a pause in one of the cafes in the town centre as you explore along the Têt valley.

On a more minor scale, be sure to amble the streets simply to admire the occasional carved and painted details you come across in the facdes of the old houses then to round off your visit there are well maintained gardens around the town hall.

Music plays a large part in the town - with Catalan music being played in the streets in August, and an annual music festival being held at the Abbey Saint-Michael de Cuxa thanks to Pablo Casals, a well known cellist who set up home here to avoid the Spanish regime under Franco.

Market day in Prades is Tuesday, a good time to visit. 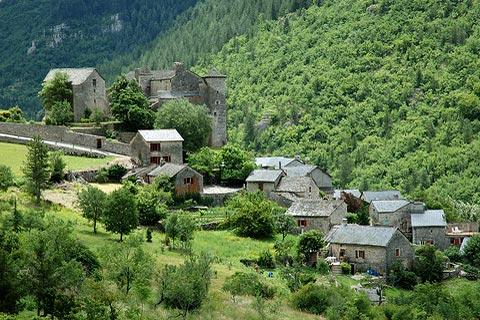 A few kilometres from Prades you should visit the attractive abbey and cloisters at Saint-Michael de Cuxa, then not much further you can visit the very lovely abbey of Saint-Martin-de-Canigou: see Mount Canigou for details.

If you enjoy visiting pretty villages both Eus and Mosset are nearby and listed among the most beautiful villages of France, and a very unusual rock amphitheatre can be seen at nearby Ille-sur-Têt.

Map of Prades and places nearby

Visit near Prades with France This Way reviews

Prades is classified as a recommended detour town (plus beau detour)

Plan your visit to Prades, Pyrenees-Orientales

Regular market(s) are held in Prades each Tuesday. (Markets are held in the morning unless stated.)

The French version of this page is at Prades (Francais)