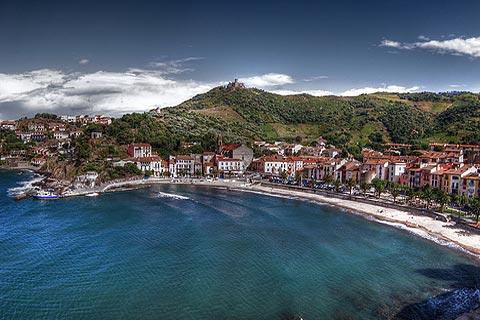 The coast of Pyrenees-Orientales has long sandy beaches and traditional fishing towns such as Collioure, so why explore elsewhere? Because inland you will find the mythical Mont Canigou, picturesque river valleys and Ceret, the town where Picasso lived and its impressive art museum!

The Pyrenees-Orientales (eastern Pyrenees) is one of the departments of France that forms part of the Languedoc-Roussillon region of southern France - it is the most southern department in the Languedoc region and extends as far as the border with Spain.

The region has two distinctive characters for visitors - the coastal region on the Mediterranean and the inland section as it extends into the foothills of the Pyrennes mountains. Both have some interesting highlights and both parts are within easy reach when you spend a few days here.

The region that lies between Mount Canigou and the coast to the south of Perpignan is known as the Albères. This mountainous region runs along the frontier between France and Spain and includes the spiritual but not really very high Mount Canigou that dominates many views of the Pyrenees-Orientales.

We particularly enjoyed the walk up to, and views from, the Mont-Canigou abbey

Other highlights in this part of the south-west Pyrenees-Orientales include the Madeloc and Massanne towers, and the castle at Ultrère, plus of course the scenery itself, the main attraction of the region. To the north of the department at Tautavel you can enjoy the impressive scenery of the Gorges des Gouleyrous.

Note: it was at Tautevel in the cave called the Caune de l'Arago that the oldest human remains known in Europe were found, a skull dating back 350 000 years.

The two main routes to explore the interior of the region are the Valleys of the Tech and Tet, both passing through much beautiful scenery:

The valley of the river Tet runs from Perpignan to Prades and beyond, passing the unusual fortified town of Villefranche de Conflent and Eus to reach Mosset - all three classified among the 'most beautiful villages of France'.

On the way to Mosset you will pass through the pretty spa village of Molitg les Bains, and we also suggest you take a detour from Prades to see the benedictine monastery at St-Michel-de Cuxa.

Another unmissable highlight that is quite close to Perpignan are the wonderful rock formations at Ille sur Tet, while another 'classified most beautiful' village a short distance south of the Tet Valley (near Thuir) is Castelnou, a picturesque village with a castle on the top of the hill behind the houses.

At the western end of the Tet Valley you reach Llivia, interesting because for historical reasons it is a Spanish town yet completely surrounded by French territory (the Spanish nationalists were allowed to occupy Llivia at the end of the Spansih Civil War).

See also our detailed guide to visiting the Tet Valley.

The Tech Valley, broadly parallel to the Tet Valley but a little further to the south, passes through Ceret, an attractive town where Picasso lived and which has a very good art museum, as well as being a pleasant town to explore.

From here you can continue along the Tet valley to see Arles-sur-Tech with its abbey and cloisters, and then don your hard hats (provided!) and entertain the children at the Gorges de la Fou with a walk along the bottom of a sheer walled canyon.

From here you can continue on to visit the lovely medieval town of Prats de Mollo, very close to the border with Spain.

The coastal section of the Pyrenees-Orientales is based to the north and south of Perpignan, a lively town with several interesting historic sights to enjoy. A visit is strongly recommended.

Before rushing to the coast (or when you have had too much of the beaches and sunshine) we suggest you also visit Elne (south of Perpignan) to see the cathedral and cloister and the Fort de Salses fortress (north of Perpignan).

The coastal region here is known as the Cote Vermeille. Much of the coast is rather over-developed but there are some pretty towns to discover and plenty of long sandy beaches.

We must first give special mention to Collioure, the highlight on the coast here and as picturesque as any French town on the Mediterranean, with a harbour and castle and lots of narrow streets of pastel coloured houses (and restaurants) to explore.

Other towns and resorts along the Cote Vermeille between Perpignan and Spain include Canet Plage, Saint-Cyprien, Port-Vendres, le Barcares, Banyuls-sur-Mer, Cerbère and Argeles-sur-Mer. Each has their own characteristics so see the individual guides for details.

Map of Pyrenees-Orientales and places nearby