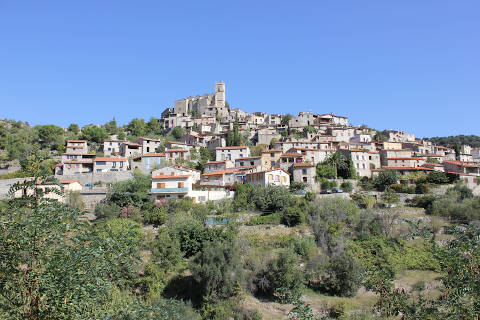 The village of Eus is situated about 40 kilometres west of Perpignan and 10 kilometres north-east of Villefranche-de-Conflent in the Languedoc-Roussillon region of southern France. Even as you approach Eus but before you arrive you have one of the best views of the village, from the main road between Prades and Perpignan. A lovely introduction to this scenic village.

Running down the slopes of a hill in the Pyreneean foothills, Eus is classified as one of the 'most beautiful villages of France'. It is also said to be the village in France that gets more sun than any other - I'm not sure if other villages make the same claim but it does suggest it's a sunny spot (and it was when we visited)!

Eus is quite small and it is the part of the village towards the top the hill around the attractive medieval centre and below the church that you will find most interesting. 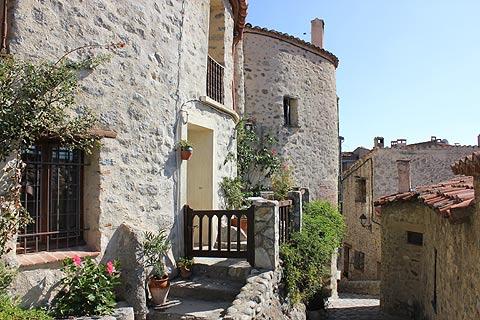 Historical note: in the 16th century the village of Eus was part of the Spanish territory and successfully defended itself against the French, but 200 years later it was back in French hands after successfully repelling the Spanish. There is still a distinct Spanish influence in the town and many of the street names are Spanish rather than French.

Begin your visit at the Church of Saint Vincent at the top of the hill. The church was constructed in the 18th century on the site of a chapel that once stood here and formed part of an earlier castle. The church still incorporates part of the castle walls in its structure, and inside you can see the altarpiece and some primitive statues.

Behind the church there are still lots of ruins of the medieval chateau which you can clamber around. The highlight is the chance to admire the views in all directions from the top of the hill.

After visiting the church head down the narrow cobbled streets below to explore the rest of Eus. These streets are very picturesque, and joined by ancient vaulted passageways.  The centre is made even more attractive by the masses of agaves, cacti and other mediterranean plants and also the mimosa trees that seem to be pushing up from every spare bit of land.

Lower down in the village there is a second church which is much more ancient than the church on the hill. This one dates from the 10th century and is also dedicated to Saint-Vincent, and also to Saint-Jean.

After having a look around, and taking the obligatory photo from the bottom of the hill, we suggest you follow the path that leads up to to the left of the church for a short distance as it passes through the fruit trees and provides more attractive views. 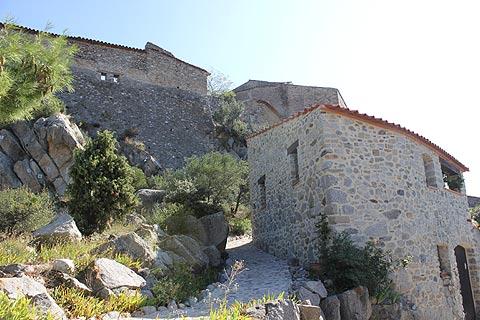 Note 1: at the time of our visit Eus was quite busy with lots of tired children struggling up the hill in the sunshine so we do recommend trying to avoid afternoons in high season if you can, unless you enjoy the sound of complaining children of course...

Note 2: If you have the chance to visit in August we also suggest you try to visit at the time of one of the concerts put on as part of the 'Nits de Canço i de Musica' exhibition.

The Abbey of St Michel de Cuxa is nearby (south of Prades) and has a crypt and belltower dating to the 11th century and ruins of a 12th century cloister. If you can visit in spring when there is a wonderful collection of irises to see.

If you continue south-west from Eus you quickly enter the Natural Regional Park of the Catalan Pyrenees which has many scenic highlights to enjoy.

Map of Eus and places nearby

Visit near Eus with France This Way reviews

Plan your visit to Eus, Pyrenees-Orientales

The French version of this page is at Eus (Francais)