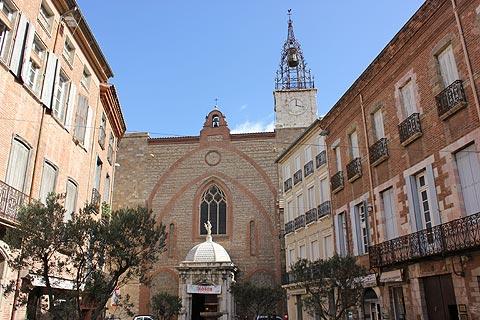 Perpignan is an important French town, 10 kilometres from the Mediterranean coast in Languedoc-Roussillon and north of the border with Spain.

Salvador Dali declared that Perpignan was the centre of the world - something of an exaggeration perhaps however the town is an interesting, lively, modern town, with its roots as an active regional centre dating to the early Middle Ages. Perpignan's medieval centre has a distinctly Catalan feel.

The medieval centre of Perpignan is charming. The river Basse runs through the city centre and has beautifully planted gardens running along its edge. To the south of the river narrow streets and open squares entice the traveller to explore the city centre.

France This Way comment: Perpignan is ideal for visitors looking for a typical 'normal' French town to simply spend some time, look in some shops, take a drink, relax and explore. 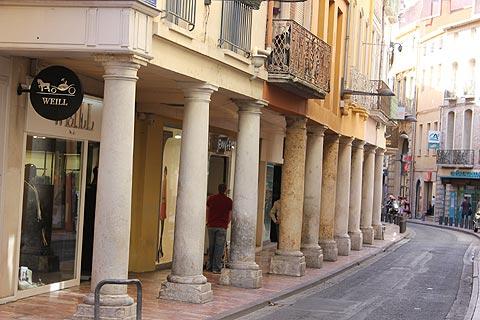 The medieval centre is quite small and easy to visit in a half a day. On the edge of the old centre is the Palace of the Kings of Majorca, a very attractive building with a moorish air. The part of the town between the 14th century entrance gate at Castillet and the Place de la Loge, and then south to the Palace of the Kings of Majorca, is the most interesting for visitors, and there are several attractive medieval buildings dotted around this central section.

On the edge of the river Basse and the Place de la Victoire is the the city gate called the Castillet. Built in the 14th century it has also been used as a prison. The Porte Notre Dame was added by Louis XI and Castillet is now home to the Museum of Catalan History.

The Hotel de Ville, called the Loge de Mer, was built over the 13th, 16th and 17th centuries and was originally the stock exchange. In its courtyard is one of Maillol's statues, La Mediterranee. The narrow Place de la Loge with its red marble floors and selection of restaurants is an attractive spot and was a favourite meeting point for refugees fleeing France for Spain during the Second World War.

Perpignan's cathedrale Saint-Jean-Baptiste was built in the 14th century in a Gothic style although it did not become a cathedral until 1601. The cathedral was built in a style with a Catalan influence especially its ornate campanile. Be sure to look inside as it has retained the paintwork that used to be in almost all churches. It is beautiful and gives the cathedral a very warm and welcoming atmosphere.

Next to the cathedral the Campo Santo is an unusual cloister-cemetery. It is the only one in France.  As it has a large open centre it is often used for concerts in the summer. In front of the cathedral you can see a lovely square surrounded by tall brick buildings with pale, painted shutters and ornate balconies.

The highlight of Perpignan is its lovely Palace of the Kings of Majorca (Palais des rois de Majorque). This was built in the 13th century for the court of Jacques II of Majorca and is a mix of civil and military architecture. It is built of a lovely red brick and from its walls you get some excellent views over the city and surrounding area. In the 17th century Vauban, a famous French military architect,  updated the military defences of the palace. He also built defensive walls around Perpignan but these were removed as the city grew. 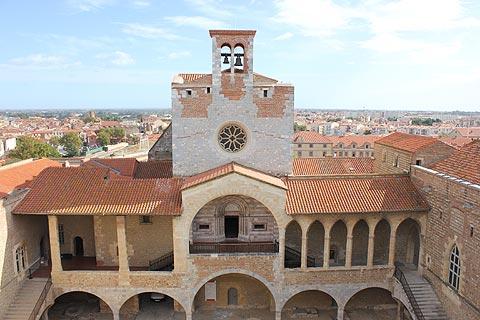 Be sure to explore the narrow alleys around the cathedral in the Arab Quarter, for a taste of a different Perpignan. Place Cassanyes is a market square with a north African flavour. The smell of the herbs and spices is delicious.

Perpignan has a decent art gallery, the Musee des Beaux-Arts Hyacinthe Rigaud, whose collection includes works by Maillol, Picasso, Miro and Dufy. This is housed in an 18th century mansion. Another interesting building is the Casa Xano which is a 16th century mansion and the only gothic house remaining in Perpignan. Its facade is sculpted with a frieze showing the seven deadly sins.

Perpignan is a good place to stay if you are hoping to explore the western Pyrenees a little, with a chance to enjoy picturesque villages, mountain scenery and historic monuments such as the cathar castles. Typical excursions include the Tech valley through Céret and towards Prats-de-Mollo-la-Preste, the Têt valley towards Villefranche-de-Conflent and mountain top castles such as Chateau Queribus and Chateau Peyrepertuse.

The closest beach to Perpignan is at Canet Plage, east of the town. Many of the beaches along this stretch of coast are rather overdeveloped and a bit featureless, but we didn't visit all of them, and they are fine if you have children want to see the sea. The historic resort at Collioure, about 25 kilometres south of Perpignan, is our favourite on this coast.

Map of Perpignan and places nearby

Visit near Perpignan with France This Way reviews

Plan your visit to Perpignan, Pyrenees-Orientales

Regular market(s) are held in Perpignan each Every day. (Markets are held in the morning unless stated.)

The French version of this page is at Perpignan (Francais)