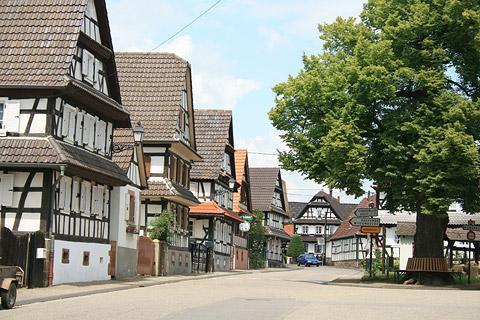 Hoffen is quite a small village south of Wissembourg in the Bas-Rhin department of the Alsace region, and just inside the Natural Regional Park of North Vosges.

France This Way comment: a visit to Hoffen won't take you very long, with most of the houses of interest along one main street and around the square at the top of the street, and there are limited commerces in the village, but we do recommend you visit: it is a very lovely street!

The focus of your visit to Hoffen is the main street through the village centre, called the Rue du Tilleul and lined by beautiful white half-timbered houses, criss-crossed with black beams and all with lovely wooden shutters. 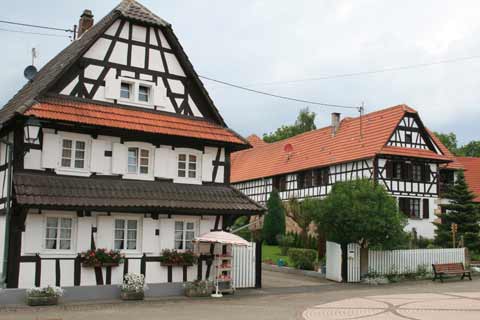 The mairie at 25, rue du Tilleul is among the picturesque houses in the village, and dates from the middle of the 19th century. There are also several flour mills in Hoffen, of which one is still operating, and a church behind the mairie.

At the top of the village there is a lime tree and a well making this a picture-postcard spot, and a popular meeting spot in Hoffen for the locals.

You can also see the Church of Saint-Joseph in Hoffen, forming a contrast to the medieval houses because it is built in red stone. The church has statues inset in the facade and a relief carving above the doorway.

Hoffen and the surrounding region in northern Alsace falls ithin the natural region referred to as the 'Outre-Foret' - a land of gently rolling hills to the north of the Haguenau forest and east of the Vosges, with the German frontier and the Rhine to the north and east.

The Outre-Foret stands outside many of the important tourist routes in the region which has allowed it to maintain its unspoiled character and traditions, especially pottery production - the traditions are celebrated at a small museum in the village of Kutzenhausen (seven kilometres east of Hoffen).

Note: historically Hoffen and neighbouring villages Hermerswiller and Leiterswiller were considered separate but they merged under the name Hoffen in 1975.

Hoffen is also close to the village of Hunspach which is classified among the 'most beautiful villages of France' - indeed, Hoffen is very much like a smaller version of its neighbour.

Map of Hoffen and places nearby

Visit near Hoffen with France This Way reviews

Plan your visit to Hoffen, Bas-Rhin

The French version of this page is at Hoffen (Francais)