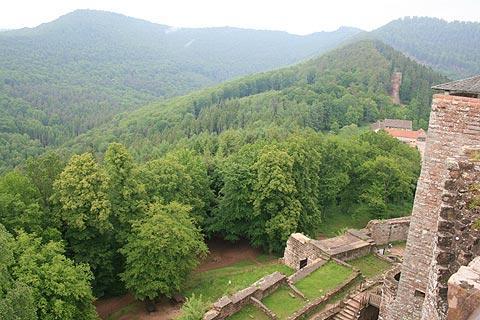 Situated 10 kilometres from Lembach, Fleckenstein is in the Bas-Rhin department of the Alsace region. It is visited for the Chateau de Fleckenstein, which is on the 'Route des Chateaux' in Alsace.

Chateau Fleckenstein forms one of about 20 ruined castles in the region - many of them perched high on inaccessible rocky needles.

As a measure of its popularity, it is interesting to note that the Chateau de Fleckenstein is the second most visited castle in Alsace, after the Chateau de Haut-Koenigsbourg. 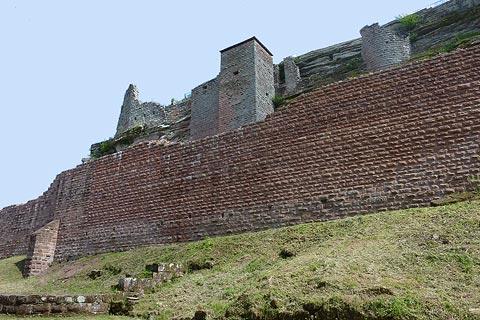 The chateau, dating from the 12th century, was built by one of the rich families in the region at that time although its original form was substantially altered during the following centuries. The castle position combined with its heavily fortified walls made it practically impossible to successfully attack.

Chateau de Fleckenstein was substantially taken apart by the French in 1689, under General Melac under the orders of Louis XIV. He was an enthusiast for destroying the landscape of a country rather than engaging in battles and it is suggested that Melac was the original source of the long standing differences between the French and Germans which lasted until the middle of the 20th century. Not much of an achievement to be proud of!

Despite the large scale damage to the castle the ruins continue to be an impressive and evocative reminder of the history of the region. Due to its use of the rock on which it is constructed as part of the building itself Fleckenstein is known as a 'troglodyte castle' - some of the castle rooms are troglodyte rooms built into the cliff itself.

After entering the lower courtyard at the castle the two large towers against the rock are the most important remains to be seen. One of these is for the staircase and the other for the well. On the top of the rock you can see the foundations of the castle keep and a part of the living accommodation.

Other notable features include the guard tower on the rock to one end of the castle and the moat that was crossed by a drawbridge.

From the ruins of Fleckenstein Castle you get excellent views over the surrounding woods and hills and in the magnificent pine woods around the castle there are lots of trails that start from the parking area of the chateau. There is also a restaurant and picnic area at the castle. 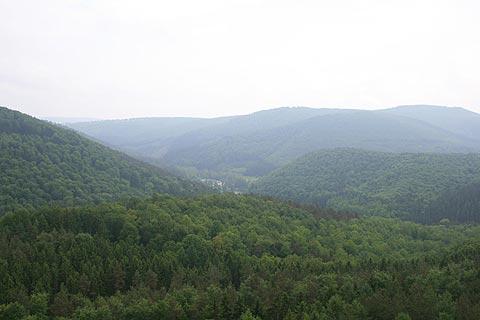 Because of the proximity of the German border there are numerous ruined castles in the area north of Lembach and westwards towards Bitche.

Other towns and villages you will enjoy visiting near here include Wissembourg and Hoffen.

See more castles in France. You can find more travel ideas in the Bas-Rhin guide and the Alsace guide.

Map of Chateau de Fleckenstein and places nearby

Visit near Chateau de Fleckenstein with France This Way reviews