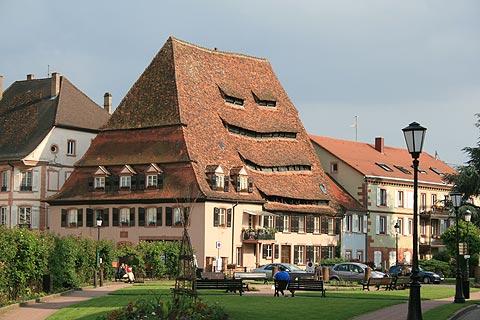 Set in the rolling landscape and wheat fields of northern Alsace, Wissembourg is a very popular destination, especially with Germans who travel across the border to visit this beautifully maintained and restored medieval town. Wissembourg is in the Alsace region on the border between France and Germany and to the north of Strasbourg.

Wissembourg was the site of the first battle in the 1870 Franco-Prussian war - the French lost the battle and the Prussians were able to enter France.

Wissembourg is a beautiful little town and an excellent base if you are staying in the region with a great deal to enjoy during a visit.

At the heart of the town is a canal, beautifully kept with gardens along one edge. The Maison du Sel with its incredible sloping roof is on one edge of the canal and further along is the Quai Angselmann with some fabulous half timber buildings. 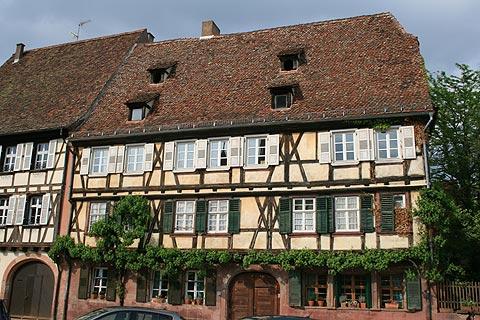 Another interesting sight in Wissembourg is the 13th century Church of Saint Peter and Saint Paul. One of the best examples of gothic churches in Alsace, the church has two towers, one of them a Roman style tower with a roof of attractive coloured tiles which gleam in the sunlight. You can see a fine wall painting of Saint Christopher, impressive stained glass windows, a famous Dubois organ and an attached cloister.

Head behind the Quai Angselmann to see the fabulously carved windows of the Westercamp museum in a wine growers house dating from 1599. The museum itself contains numerous items from the history of Wissembourg.

Strolling around Wissembourg you will see several other interesting houses and monuments such as the Stanislaus Palace, the Augustines Convent, the Grange aux Dimes (with 13th century origins), the Maison de Chevaliers and the ornate carvings of the Maison de l'Ami Fritz. The buildings mentioned are just a few of the most impressive examples: there are many other imposing and lovely houses in Wissembourg that you will discover as you explore.

Many of the beautiful half-timbered houses of Wissembourg date from the 15th and 16th centuries, but the same style was used right through to the 19th century so it is difficult to estimate the age of a house by looking at it. Those where the upper stories overhang the ground floor level tend to be older.

In the centre of Wissembourg you will also see the imposing red stone town hall which was built in the 1740s, the original having been burned down, and the Church of Saint-Jean with its 13th century roman style belltower also merits a visit.

Substantial parts of the original medieval town defensive walls can also be seen along with various of the towers that also formed part of these defences such as the 15th century Schartenturm and Hausgenossen towers. 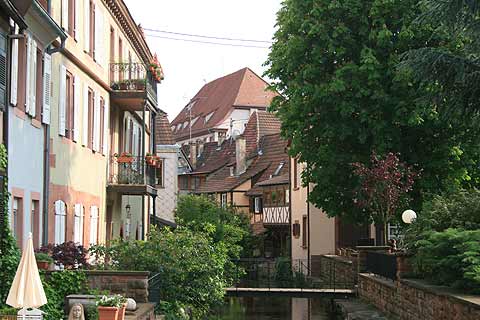 Wissembourg is on the edges of the Natural Regional Park of the Northern Vosges, a listed world biosphere reserve. The town has also developed several marked walks and cycle routes in the region so you can make the most of a visit to the region. You can get good views acros the parc from the castle at Fleckenstein.

Map of Wissembourg and places nearby

Visit near Wissembourg with France This Way reviews

Wissembourg is classified as a recommended detour town (plus beau detour)

Plan your visit to Wissembourg, Bas-Rhin

The French version of this page is at Wissembourg (Francais)