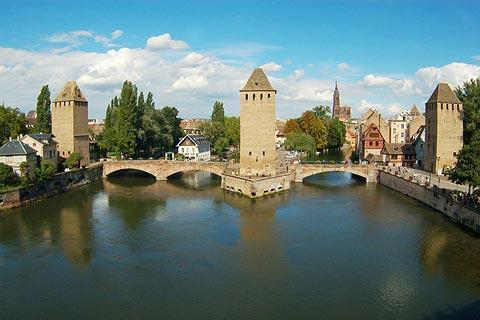 The Bas-Rhin region of Alsace features the attractive city of Strasbourg, numerous picture-postcard villages, and several dramatically located hilltop castles - a region to to discover!

The climate here is almost 'continental' with hot summers and dry, cold winters and there is much to enjoy, with an interesting mix of vineyards, rolling countryside and forests, historical monuments and villages of half-timbered houses painted in the bright colours unique to Alsace and that give the region its special character.

Note that although we mention quite a few villages below, there are a great deal of others that you will discover as you explore with similar characteristics - often little more than a single street of painted and half-timbered houses and a small church.

Strasbourg and the northern Bas-Rhin

The lovely city of Strasbourg will most certainly be among the highlights of your visit to Bas-Rhin, and is one of our favourite cities in France.

It is a very important and attractive city listed as both a 'world heritage site' and as a 'secteur sauvegardé' (that is, no significant changes can be made to the city's architecture). See Strasbourg for details of the famous gothic cathedral and other highlights.

Between Strasbourg and Saverne to the west, the town of Wasselonne has some lovely traditional painted houses in the town centre. Continuing further to the west another town worth visiting is at Saverne, and you can see an impressive example of the local church architecture at the nearby town of Marmoutier.

North-east of Saverne we also enjoyed a stroll around the picturesque historic centre of Bouxwiller, and the ruins of Chateau de Haut-Barr are worth visiting for their location on a rocky outcrop with far-reaching views.

Heading north from Strasbourg you reach Haguenau. Although Haguenau is not usually an important town for tourists it does have museums of interest, such as the Museum of Alsace.

Also in the north the classified 'most beautiful village of France' of Hunspach is highly recommended, and we very much enjoyed exploring the nearby village of Hoffen, which has one of the most attractive high streets in the area.

A more recent addition to the landscape is the Maginot Line, a series of defences built in eastern France before the Second World War as a defence against invasion by Germany. You can see a substantial part of the installation with a massive concrete bunker and gun emplacements at the Fort de Schoenenbourg near Hunspach.

Note that as an alternative to following the popular route that passes through the most picturesque villages of the region, there is an alternative scenic route that follows the eastern border of the Bas-Rhin department along the Rhine river and the frontier with Germany.

On the north-west border of Bas-Rhin (and into the Moselle department of the Lorraine region) you enter the Regional Natural Park of the Vosges du Nord.

This is a scenic region of low population, with a landscape of hills covered with forests, rocky outcrops and cliffs, and numerous small streams and lakes which is very pleasant to explore and not too busy with tourists.

The headquarters for exploring the park, where you can obtain a great deal of information about exploring, walks and suggested routes is at the small village of La Petite-Pierre to the west of Neuwiller-les-Saverne, and a possible base for exploring this area of the Alsace is the town of Lembach.

Among the natural highlights there are also some attractive villages and fascinating ruined castles, for example at Fleckenstein in the hills just west of the delightful town of Wissembourg.

In the forest to the south of Saverne at Graufthal (part of Eschbourg) you can see some very unusual troglodyte houses painted in bright colours, perhaps unique in France, and to the far west of the Bas-Rhin (just outside the western border of the Park du Vosges du Nord) the Chateau de Diedendorf is a 16th century fortified manor house with attractive gardens.

Still in the Bas-Rhin department, this time heading south-west from Strasbourg, you should first visit Rosheim and Molsheim, then continue to see the village of Obernai and its quiet neighbour at Barr.

There is also a popular spa town at Soultz-les-Bains just down the road from here. Two historic monuments should be visited in the hills just west of Obernai:

As a complete contrast, Le Struthof was the only WWII concentration camp built in France (it formed part of the German occupied territory during the war) and is also in this part of Alsace, a short distance west of Mont-Sainte-Odile.

Continuing south through Bas-Rhin there is another classified 'most beautiful village' that we recommend you visit at Mittelbergheim.

Next we suggest you visit two religious monuments typical of the region. The first is the abbey at Ebersmunster and the other, in complete contrast, is the little chapel at Epfig.

Heading towards the southern border of Bas-Rhin, one town of interest is Kintzheim, particularly well known for the aviary in the castle.

Nearby, a town that seems to get rather overlooked by tourist guides compared with some destinations in Alsace is Sélestat although we found it very pleasant to visit.

In the hills just west of here an important highlight for any visit to Bas-Rhin is the Chateau du Haut-Koenigsbourg - perhaps the most famous castle in Alsace and with very beautiful views and a fascinating history.

Map of Bas-Rhin and places nearby

Discover the Alsace Wine Route and the villages south of Strasbourg

See an index of all Bas-Rhin communes