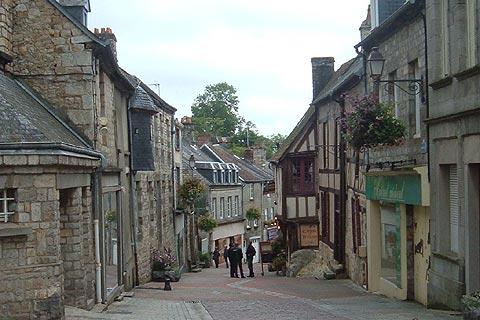 Domfront is found in the Orne department of Normandy, between Argentan and Vire and on the Varenne River.

In the 11th century Domfront was the scene of much action and fighting, since it occupied an important point on the border between Brittany and Normandy. Hence Domfront castle, originally built at the beginning of the 11th century, was much fortified during the decades that followed. Unfortunately much of the castle was destroyed as a result of the Wars of Religion.

In Domfront you can start your visit at the ruins of the medieval castle. Although you can now only see the remains of the walls and a part of the central logis of the castle, this is a pretty and evocative place. On the edge of the village and separated from it by a small bridge, there is a lovely view across the village from the gardens next to the castle.

The town itself was also fortified, and many of the towers survive, along with sections of the ramparts, which now provide a good backdrop for the numerous medieval houses and buildings to be seen in Domfront. The majority of the towers can be seen along the Rue des Fossés Pusson along the southern edge of the historic centre.

Within the fortifications is the old town, an attractive region with narrow cobbled streets lined with half-timbered houses and some grander townhouses, interspersed with pleasant cafes and open squares. It is easy to get your bearings, with with most of the buildings of interest along the two parallel streets and the alleys and squares that separate them.

Another historically interesting building in the town is the 11th century roman style church of Notre-Dame sur l'Eau. The church once formed part of an adjoining abbey, on an important pilgrimage route, and played host to such medieval dignitaries as Richard the Lionheart and Eleanor of Aquitaine. Be sure to venture into the church to see some impressive frescoes and carvings.

Other places of note within Domfront include the grand 19th century town hall, the 20th century church of Saint-Julien (a rather unusual style of architecture, especially for the facade) and the paintings it contains, the ruins of the donjon and the picturesque village of the tanneries.

From the town you also have an impressive view across the Varenne River valley and the bocage. While you are enjoying the view from Place du Panorama take a moment to remember that this square was originally full of medieval houses but they were destroyed during the allied invasion of France in June 1944. 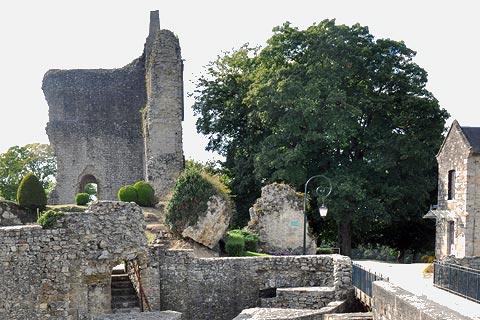 When staying here you are well placed to discover the countryside of this part of Normandy: Domfront falls in the western part of the Regional Natural Parc of Normandy-Maine, a quiet unspoiled landscape of rolling hills, forests and streams with many traditional villages to visit.

There are several imposing manor houses in the surrounding countryside which also contribute to the charm of a visit. These include the Manoir de la Bonelière and its garden at Saint-Mars d'Egrenne and the manor houses at La Haute-Chapelle such as the Manoir de la Guyardière. Get full details from the Domfront Tourist Office in Place de la Roirie.

Although the countryside is the main attraction here and we suggest you walk or cycle as much as possible to better appreciate the landscapes, we also recommend a visit to see the belle-epoque architecture and lakeside walk at Bagnoles de l'Orne, to the east of Domfront.

Map of Domfront and places nearby

Visit near Domfront with France This Way reviews

Domfront is classified as a recommended detour town (plus beau detour)

Plan your visit to Domfront, Orne

The French version of this page is at Domfront (Francais)