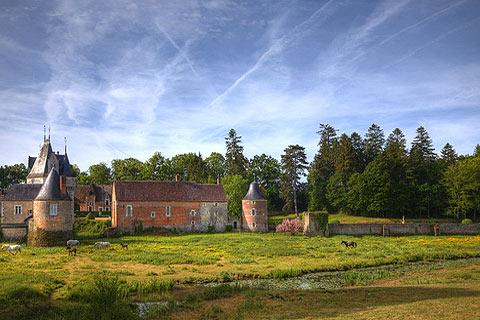 Relatively undiscovered compared to the coastal regions of Normandy, the Orne department has a great deal to commend it with large areas of scenic countryside, rivers and forests, and some interesting historic towns and pretty villages to be discovered.

Orne is a department of France located to the south of the Lower Normandy region. It is a region to be visited by those who love the countryside with the chance to explore quiet waterways and extensive areas of forest and to enjoy picturesque scenery, and to come across quiet villages and towns with historic centres.

To help with your travel planning we explore the Orne and its highlights in three different region: the east, the centre around Alencon, and the west:

To the south-east of the Orne department you can explore the Le Perche region, based around the town of Belleme.

Le Perche is a designated Regional Natural Parc with large areas of forest and small rivers and a perfect region for walking and cycling in quiet unspoiled countryside.

Start your visit to the park at the Manoir et Domaine de Courboyer, the information centre and manor house in the centre of the natural parc at Nocé.

Also in the east the town of Mortagne-au-Perche has a historical centre which is very pleasant to explore, with a good number of 17th century townhouses to admire.

Scattered around the Perche region you will also come across various pretty villages which individually don't take long to wander around but are still very charming - among the ones we visited are Ceton, La Perriere and Villeray but it is certain that you will discover your own favourites as you explore...

Orne: the centre and Alencon

The main town in the Orne, and one that has several very interesting historical monuments, is Alencon. A short distance to the south-west of Alencon is Saint-Ceneri-le-Gerei, one of the prettiest villages in the department and classified as one of the 'most beautiful villages of France'.

Garden enthusiasts will want to visit the Jardins de la Mansonière near Saint-Ceneri-le-Gerei.

To the north of Alencon, the town of Argentan has a historic centre that is pleasant to explore.

To the east of Argentan you will find the most visited attraction in Orne, the National Stud at Haras-du-Pin, while a short distance to the west of the town a riverside walk through the village of Putanges-Pont-Ecrepin is also very enjoyable.

In the Douves Forest between Alencon and Argentan you can visit Sées, which is home to an imposing gothic style cathedral. There are several other interesting historic monuments near here including:

A substantial part of the regional natural Park of Normandie-Maine falls within the south-west of the Orne department. To the east of Bagnoles at Carrouges there is an imposing red brick castle that holds the main visitor centre for the natural park.

The substantial forested areas to explore here include the Andaines Forest around the medieval town and ruined castle of Domfront. Within the park there are lots of picturesque highlights, both natural such as lakes and gorges and historic monuments such as the Saint-Antoine Chapel and the Bonvouloir Tower.

The village of Saint-Fraimbault is a 4* 'town in bloom' in the south-west of the Orne which has won various awards for its flowers and a visit is recommended if you visit the region in late spring or summer.

A popular attraction with visitors to the western Orne is the leisure lake at La Ferté-Macé.

It is also interesting to visit the spa town at Bagnoles de l'Orne and treat yourself to a relaxing treatment and a stroll around the lake - or just to enjoy the belle-epoque architecture...

Further to the north-west in Orne we enjoyed visiting the castle and parkland at Flers and also the museum of art and sculpture in the castle.

The region here is called 'Suisse Normandie' and is a forested area with some lovely scenery. One of the best ways to appreciate the region is to go to the viewpoint called the Roche d'Oetre near Saint-Philbert-sur-Orne.

Last but not least, the Orne has a longstanding culinary reputation and you should take every opportunity to sample the food in the local restaurants.

The best known product produced here is surely the famous camembert cheese, originating from a village of the same name to the north-east of the department, and the 'boudin noir' from Mortagne-au-Perche is also highly recommended.

Map of Orne and places nearby

See an index of all Orne communes.