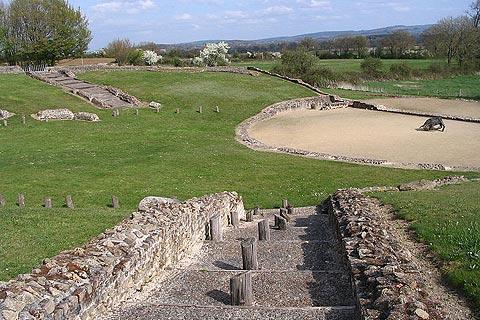 Jublains is a small village situated towards the north of the Mayenne department in the Pays-de-la-Loire region of France, and not far from the town of Mayenne. It is best known as the site of an important ancient settlement, of which important parts can still be seen.

The site, was first established by a gallic tribe called the Diablintes, then later re-occupied by the ancient romans after they had conquered the region, at which time it was called called Noeodunum (or Noviodunum).

There is unfortunately nothing to see of the original gallic village because that would have been constructed in wood. The extensive ruins we see today all date from the roman period, when it became an important regional centre.

At Jublains you can clearly distinguish the remains of several important buildings including:

If you only have time to visit one of the roman monuments in Jublains it should be the fortress - you might have seen more complete temples and amphitheatres elsewhere in France, but it's this is the most complete fortress that I remember seeing. The substantial building was more than 10000 square metres, and had large towers at each corner and elsewhere in the walls.

You access the ruins of the fortress through the Archaeological Museum at Jublains, which presents artefacts both discovered at the site and in the region to explain the history of Mayenne. Take the time to look around the museum, which contains some very interesting artefacts including busts, carvings, ornaments and mosaics.

Note: photo of Jublains is copyright

Although it is true to say that Evron is not in one of the most visited regions of France, we do suggest that visitors also find the time to explore the town centre of Mayenne and also to take a stroll around the village of Sainte-Suzanne to the south-east of here.

Map of Jublains and places nearby

Visit near Jublains with France This Way reviews

Jublains is classified as a listed town of Art and History

Plan your visit to Jublains, Mayenne

The French version of this page is at Jublains (Francais)