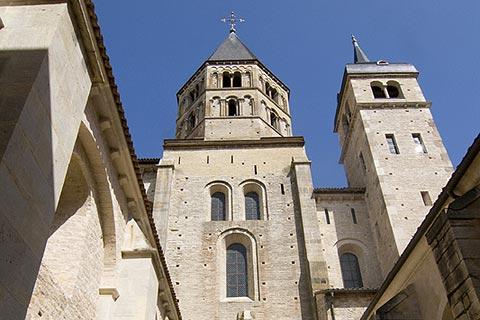 The small town of Cluny is in the Saône-et-Loire department of Burgundy, to the north-east of Macon. It is most visited for Cluny Abbey, one of most important abbeys in France, and also has a village centre that is pleasant to explore.

Your visit will undoubtedly start at Cluny Abbey, a listed National Monument in France, but you should also allow yourself time to explore the village which has retained some interesting historic buildings...

Although the church at Cluny, once the largest in the western world, was largely dismantled by 1810 the parts that remain are still significant and interesting, and give an indication of the original grandeur of Cluny. Parts of the transepts and belltower remain of the abbey church, while among the other remaining buildings you can see the granary, and parts of the towers that stood either side of the entrance. 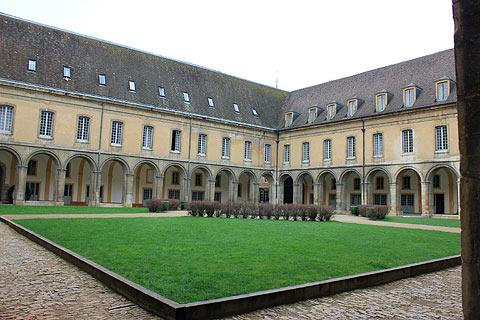 Inside the transept you can see a chapel with some intricate stonework. Although not much of the original abbey remains some impressive flat screens have been added in such a way that you can turn round to "see" different views of the abbey as it would have looked originally.

In the granary there is an interesting small museum with some of the stone carvings saved from the time that the abbey was dismantled. In the 16th century Palace of Jean-de-Bourbon you can see further examples of stonework that once formed part of Cluny abbey.

The cloister that we see today was added in the 17th century and is nicely maintained but the highlight of your visit is an ascent of the 'Tour des Fromages' which gives you great views over the abbey, the village and the surrounding Burgundy countryside. This tower also has an augmented reality screen allowing you to get an idea of the scale of the abbey buildings before they were dismantled.

The Museum of Art and Archaeology at the abbey (entrance included in the price of abbey admission) is both interesting and instructive as an aid to understanding what the abbey was like 800 years ago.

Founded in the early 10th century, the first abbey was built around 927 - and replaced 70 years later by a more imposing abbey built for the relics of Saint Peter and Saint Paul. The church was replaced again towards the end of the 11th century, with the buildings that we see today in part dating from this third reconstruction.

Because of the presence of the relics of these two important saints, for the two centuries from 910 when the monastery was founded Cluny was second only to Rome in the religious influence it held over the Europe of the time, and the abbots from Cluny were important players on the international political scene.

From that time on the power of Rome over the abbey increased, and theabbey also had financial difficulties, and the authority of the abbey started to diminish. The Wars of Religion further reduced the importance of the abbey.

After the revolution the abbey grounds and furnishings were sold and the demolition of the abbey started and a great deal of the original large roman style church no longer exists. As a result it is the sense of history that you get from a visit to Cluny Abbey that almost as important as the place itself, attractive as it is.

The village of Cluny grew up around the abbey, and is a very pretty village with a few streets of old and attractive houses. The Town Hall is in a building that was the abbatiale palace in the 16th century and the Hotel Dieu can also be visited - built in 1646 it houses a chapel, and the rooms where the sick were treated. You will also see the roman style church of Saint-Marcel.

The market in Cluny is held on a Saturday morning.

If you are a horse enthusiast there is a French 'Haras National' behind the abbey. A national centre for breeding and training purebred horses, the haras can be visited and there are frequently events held where the horses can be admired 'in action'. 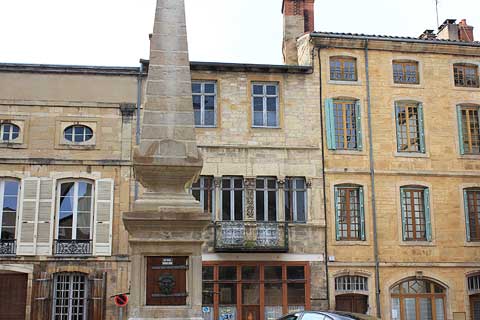 Among the most popular attractions near Cluny are the Chateau at Cormatin and the village of Brancion, both to the north of Cluny, and Mâcon to the south-west is a larger town with several sights of interest.

Map of Cluny and places nearby

Visit near Cluny with France This Way reviews

Plan your visit to Cluny, Saone-et-Loire

Regular market(s) are held in Cluny each Saturday. (Markets are held in the morning unless stated.)

The French version of this page is at Cluny (Francais)