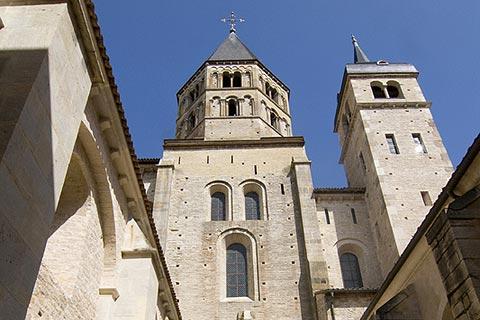 Visit Saone-et Loire to experience a quieter region of Burgundy, experienced most famously in the reflective calm of Cluny abbey and Paray-le-Monial, but also in many of the towns and villages and scenic highlights of this tranquil department.

The Saone-et-Loire department is situated in the south-west corner of the Burgundy region of France, with Maçon the capital (prefecture) of the department.

The department falls naturally into three regions: the east around Chalon-sur-Saône and Louhans; the south with Macon, Cluny and Paray-le-Monial; and the north around Autun. To help with your travel planning we have looked at each of these areas separately below:

Highlights in the east of the department include the quiet traditional Burgundy town of Louhans. We also suggest you visit Chalon-sur-Saone between Dijon and Mâcon for a stroll around the historic centre and to see the cathedral.

One of the most important castles in the department, the Chateau de Pierre-de-Bresse, is an imposing renaissance style castle with extensive formal gardens to the north-west of Saone-et-Loire.

To the south-west of here the town of Tournus is to the north-east of Cluny, and also has an interesting centre with an abbey and several interesting historical buildings to see.

Close to here the castle at Cormatin has several lavishly decorated and furnished rooms and is in an attractive setting surrounded by carefully maintained French-style gardens.

Between Tournus and Cormatin we also suggest you pause for a visit to the village of Brancion, which has been substantially renovated in recent years and is very pleasant to explore. Close to here we also enjoyed visiting the small villages of Chapaize and Uchizy.

One particular highlight of southern Burgundy is the renowned monastery at Cluny, one of the most visited religious complexes in France and in medieval times one of the most important monastic settlements in the world. The village of Cluny itself is also very pretty.

We also enjoyed the riverside walk through the town of Mâcon to the south-east of Cluny.

Between Cluny and Macon we suggest you take a walk around the small village of Berzé-le-Chatel, which has several notable historic buildings including a medieval fortress which overlooks the small village (there are attractive views from the terraced gardens at the castle).

Close to here the village of Solutré-Pouilly is surrounded by the famous vineyards of the region and dominated by the Rock of Solutré, a rocky outcrop that was occupied in prehistoric times and is also classified as one of the 'grand sites of France'.

One of our favourites sites in this region is the Arboretum de Pézanin at Dompierre-les-Ormes. This extensive arboretum includes a lake and many species of trees and plants, and also the 'European Gallery of Forests and Woodlands' with a focus on explaining the importance of forests and landscapes.

West of Maçon the Chateau de Drée is one of the best examples of 18th century classical architecture in the region and the surrounding gardens are officially classified as a French 'remarkable garden'.

Passing now towards the south-west of Saone-et-Loire, be sure to visit the 12th century basilica at Paray-le-Monial. This pilgrimages site attracts more than a million visitors each year and also helps understand what the abbey at Cluny would have been like when it was first constructed.

The priory church at Anzy-le-Duc a little to the south of Paray-le-Monial is a very lovely example of 12th century roman architecture with some interesting medieval frescoes.

The Brionnais region is in the south-western corner of Saône-et-Loire and centred around the beautiful village at Semur-en-Brionnais.

A region of attractive rolling countryside, hedgerows and small woodlands, the Brionnais is best known for the large number of interesting small churches to be seen, and there are also several castles here that you will discover as you explore

The most important towns and villages in the Brionnais region are Marcigny, Briant, Chauffailles, La Clayette (best known for the pretty Chateau de la Clayette) and Saint-Julien-de-Civry.

Stepping far back in history, visit Bibracte on the summit of Mont Beuvray (north-west of Saint-Léger-sous-Beuvray). This is an important location because it was once the centre of a very important celtic settlement, and various exhibits pay tribute to this history. The site is officially listed as one of just 33 'Grand Sites of France'.

Moving forwards to Ancient Roman times, at Autun in the north-west corner of Saone-et-Loire (east of Beaune) you can see some important Roman ruins.

You can also learn of the more recent history in the region at the ecomuseum at Le Creusot, which focusses on the rich industrial heritage of the region.

One of the best places to enjoy the natural environment of Burgundy is in the Morvan Regional Natural Park, part of which falls within the north-west corner of Saone-et-Loire (most of the park is within the Nievre department to the west) and is a quiet region of unspoiled countryside and villages, valleys and woodlands.

The fortified village of Charolles is in a pretty riverside setting and is best known as being the centre of the historic Charolais region of France. The name is now better known for the light-coloured race of Charolais cows that are still raised in the region.

Map of Saone-et-Loire and places nearby

See an index of all Saone-et-Loire communes