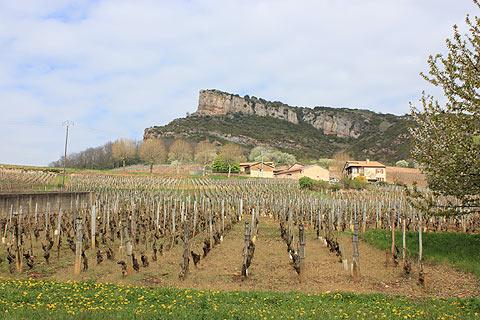 If you are in the region to discover the wines of Burgundy this is a good place to visit: Solutré-Pouilly is surrounded on all sides by vineyards and practically every other house is a wine cave. There are dozens of them - literally.

Above the village and dominating the countryside around is a large limestone cliff - the Rock of Solutre. This rock is now one of the 'Grand Sites de France' both as a geographical phenomenon but also as a prehistoric site as evidence has been found here of the Solutrean paleolithic culture.

France This Way comment: the combination of the small but picturesque village, the scenic vineyards, and the Rock of Solutre together make this an interesting destination in Burgundy. 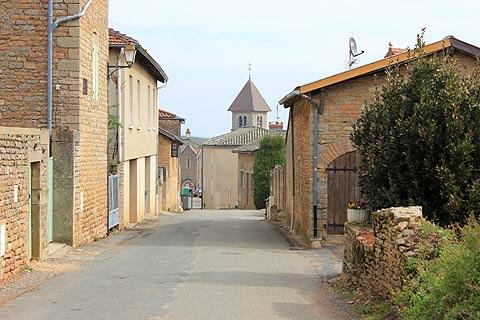 From the village there is a half hour walk to the top of the Rock of Solutre which became well known in the 1980s when Francois Mitterand made a ritual ascent every year.

The prehistoric remains found here are some of the richest in Europe which has led to the rock giving its name to a distinct culture of the Upper Palaeolithic period (20000-16000 BC).

The rock was an important hunting site for more than 25 000 years and thousands of horses and reindeers were hunted and killed here. Legend has it that herds of horses were driven to the top of the Rock of Solutre and then fell to their deaths from the cliff top but this is known to be untrue - they were ambushed and killed at the foot of the rock.

As it was such a key hunting site many tools associated with hunting have been found here including 'laurel-leaf' shaped flints associated with the Soloutrean Palaeolithic people. There is a museum at the foot of the Rock of Solutré with exhibits found here. The museum is built under a dome planted with vegetation in order not to detract from the dramatic physical location.

As well as the Archeologic Park the site is a Botanic garden and along a laid out walk it is possible to see many rare plant species as well as information about prehistoric hunting techniques. Of course there is also a magnificent view at the top of the cliff.

The Archaeology Park and Botanic Garden are included in the entrance ticket for the museum. 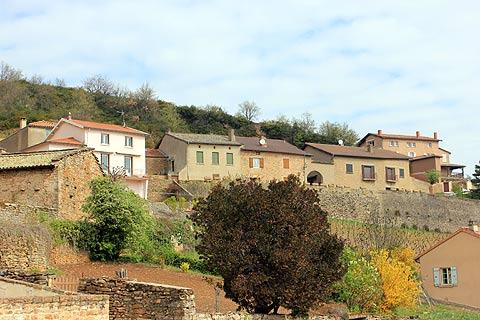 You can visit the town of Macon and the Chateau de Lamartine just a short distance east of Solutre-Pouilly, and you will certainly also want to visit the village and abbey at Cluny to the north-west of here: for many centuries this was the largest nd most powerful abbey in Europe.

Map of Solutre-Pouilly and places nearby

Visit near Solutre-Pouilly with France This Way reviews

The French version of this page is at Solutre-Pouilly (Francais)