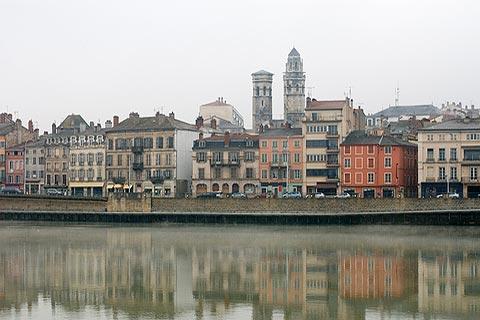 Mâcon is on the banks of the Saone river in the Saone-et-Loire department of France, to the south of the Burgundy region, north of Lyon and near Cluny. The town is the most southerly in Burgundy, and perhaps the first town that you come to when heading south through France that feels 'Mediterranean', with canal tile rooves and pastel painted buildings.

With a history dating back more than 2000 years, Macon prospered thanks to its historical position as an important border town to the east of France, and on an important trading route. The town and region, like many in Burgundy, are now very well known for the local wines produced nearby.

Macon is a pleasant place to pass some time: the section of the town along the banks of the Saone River is the most interesting and attractive for visitors - in particular the view across the river to the town from the opposite bank with the cathedral towers dominating the skyline. 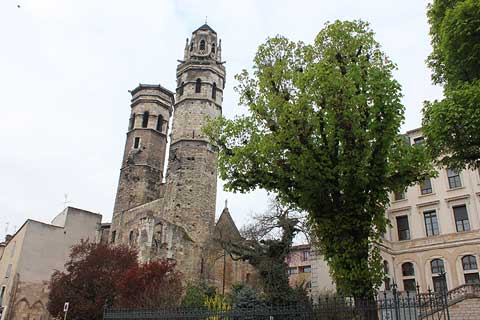 The Old Cathedral of Saint-Vincent, built in the 11th century - 14th century, is the principal highlight, although much of the original structure is no longer standing - unfortunate because it was clearly an imposing structure. The remaining octagonal towers and the imposing entrance give a clue as to what the cathedral was once like, while inside there are models to help visitors visualise the original structure.

The old centre of the town, just back from the river and the esplanade Lamertine, has some interesting houses - see especially the carpentry work and carvings on the 15th century Maison de Bois.

The new Cathedral of Saint Vincent was built in the 19th century to replace the earlier cathedral of the same name. It is in the neoclassical style with the facade dominated by an entrance with four large stone columns.

You can see a third church, the Church of Saint-Pierre, opposite the town hall. At first glance this church appears romanesque in style but was actually built in the middle of the 19th century using the earlier style as inspiration. It is an attractive building with two large bell towers topped by stone spires and built in the neo-Romanesque style. Its front facade has three stone doorways surrounded by highly carved stonework, especially the larger central door.

Macon has also been awarded the prestigious 4* with two 'golden flowers' award for 'Towns in Bloom' and you will find a good number of small parks and gardens in the town centre where you can enjoy the flowers and plants. 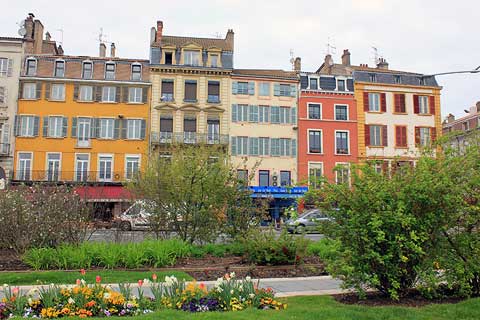 When you visit you will see several mentions of Lamartine, the renowned 19th century French poet and politician who was born in Macon in 1790.

You can visit Lamartines chateau close to Macon - a mix of a 12th century defensive castle with 19th century additions by Lamartine. Inside, the rooms of the castle contain a large collection of items from his life, while the outside is surrounded by very picturesque gardens and parkland. The Château de Lamartine is situated at Saint-Point, north-west of Macon.

A nice way to reach the castle and see the area is by following the route of about 50 kilometres proposed by the Macon tourist office as the 'Route Lamartine'. See the route here.

If you are visiting to explore the wines of the region there are numerous different wine routes proposed by the tourist authorities that will introduce you to the many vineyards and wine chateaux of the Maconnais-Beaujolais wine region. Ask for information at Macon Tourist Information Office. The wine area to the west of the town includes Solutre-Pouilly, overshadowed by a large rocky outcrop and a popular local scenic attraction.

Visitors will certainly also want to visit the abbey at Cluny, which for three hundred years was the largest and most powerful abbey in Europe.

Map of Macon and places nearby

Visit near Macon with France This Way reviews

Macon is classified as a village in bloom (ville fleurie) 4*

Plan your visit to Macon, Saone-et-Loire

Regular market(s) are held in Macon each Saturday. (Markets are held in the morning unless stated.)

The French version of this page is at Macon (Francais)