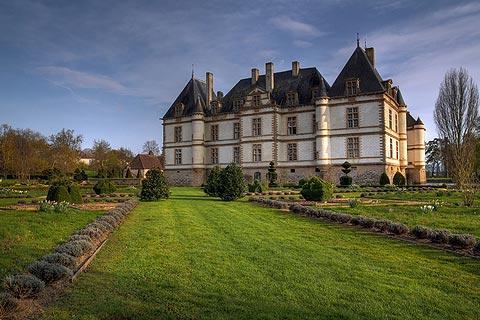 Cormatin is a small village to the north of Cluny, in the Saone-et-Loire department of southern Burgundy. The village is best known (and most visited) for its castle.

Cormatin Chateau is a fine 17th century building, set in attractive gardens and parkland in the Burgundy countryside. The chateau currently has two wings but was originally built in a horseshoe shape with three wings and then the fourth side closed by battlements. This closed aspect was symbolic at the time and stated that the lord was master in his own home.

With the rise of the monarchy the fourth side was demolished and the chateau opened up - a symbolic sign of submission to the king. The third wing of the castle fell into disrepair following the excessive spending of one of the daughters of the household and now the castle just has two wings and an open aspect over the surrounding countryside. 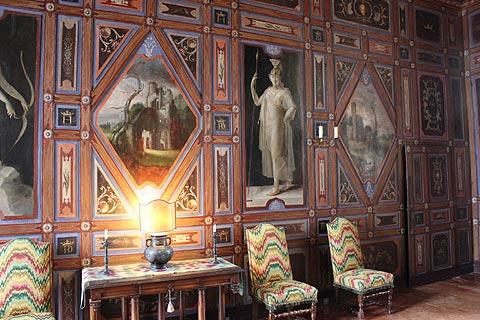 The moated chateau is entered through an elaborate stone doorway, into an interior that is quite remarkable - many of the salons and bedroom are painted and furnished in the style of the period, with Louis XIII furnishings and wallhangings, grand wall murals and great high ceilings - the rooms forming part of the 'salles dorées' need to be seen to be believed, with every surface covered in paintings, decorative artwork and gilding.

On entering the chateau the grand staircase that rises to the first floor is the first thing you see. This monumental staircase is open rather than surrounded by walls as was usually the case at this time. It is a copy of the Hotel de Luxembourg and is one of the oldest of its kind, though the style became common for the next two centuries in noble buildings.

On one side of the staircase are the ladies rooms and on the other those of  the Marquis. As marriages were not made for love among noble families during this period this seperation was a common feature of great houses. At the Chateau de Cormatin the familly were at their peak with the Marquis Jacques du Blé who at the age of 35 married his wife of 13 years old!

The main accommodation is in the north wing because the chateau was primarily used in the summer when the noble family came to the country to check the peasants were paying the correct tithes (sacks of wheat, barrels of wine etc.) and the north wing was coolest in the summer.

The Marquise's appartments consisted of the antechamber where her visitors waited for her to be ready. This room is entirely decorated by painted panels. This leads to the bedroom where the Marquise spent her day. This too was the usual arrangement at the time, meals were eaten in the bedroom and guests were received in the bedroom. The Marquise's bedroom in the Chateau de Cormatin is a wonderful room with a wooden ceiling painted deep blue and colourful walls and paintings.

On the other side of the staircase are the Marquis' appartments though the antechamber was converted into the kitchen during the Revolution when the owner lived alone with her 6 children and could not manage the large kitchen in the cellar which is designed for use by many servants.

There is a connecting space between the appartments which consists of two rooms. One is given over to displays of curiosities which were becoming popular as adventurers started to travel the world. The other room is the Cabinet of St Cecilia and is the highlight of Cormatin chateau.

It is the best preserved 17th century room in France and is sumptuously decorated with walls of deep blue and gleaming gold. Flemish painters painted the wooden panels of the room and the guide gives a very interesting account of the reasons and symbolism for the different images. 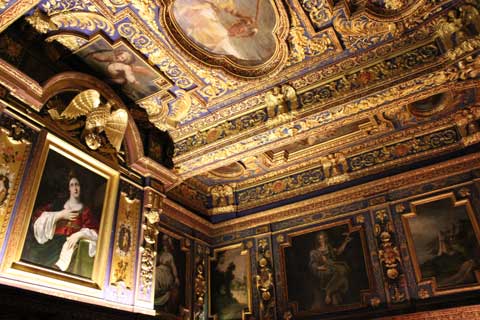 Around the outside of Cormatin Chateau the gardens have been extensively reconstructed and replanted in recent years, in the French style popular at the time when Cormatin was originally built and incorporating water features and numerous garden layout styles in a lovely attempt to produce a garden that represents the original setting.

One unexpected discovery in Cormatin village is the Musée du Poilu (Poilu is the French name given to the soldiers who fought in the trenches of the first world war) where you can see articles from that period, numerous small items hand made by the soldiers in the trenches, and also a reconstruction of part of one of the trenches to help bring it to life for children entrance charge 5 euros (see the Musée du Poilu site for details and opening hours)

Not far south of Cormatin you can visit the abbey at Cluny, once the largest abbey in Europe and now brought back to life using technology! In the village of Brancion you can see a roman style church and a medieval castle.

Map of Cormatin and places nearby

Visit near Cormatin with France This Way reviews

The French version of this page is at Cormatin (Francais)