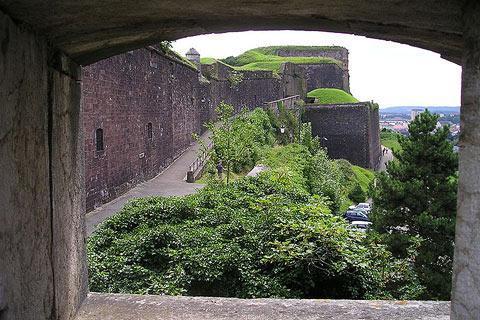 Belfort is a town on a plateau between the Jura mountains (to the south) and the Vosges mountains (to the north), in the Franche-Comte region of eastern France (hence close to the border with Switzerland). The town is the capital of the small Territoire-de-Belfort department.

France This Way comment: while the Territoire-de-Belfort is not the most visited department in France, Belfort itself has some interesting features that make a detour to the town worthwhile, based around the historical centre.

The most notable monument, that dominates the town, is the Belfort Citadel. The citadel has protected this important route between the mountains since the 17th century, with the fortifications improved by Vauban in the 17th century. The citadel was then further reinforced in the early 19th century, with a ring of defences a couple of kilometres outside Belfort, parts of which can be seen for example at the Fort du Salbert. 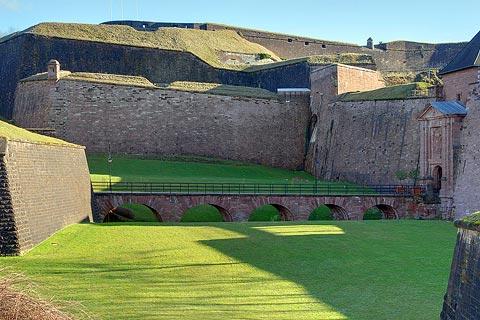 A visit to the inside of the fortress is a good way to understand the structure and the strength of the defences, which are extremely substantial, while it is in aerial photos that you can best see the characteristic pentagonal structure of the Vauban fortifications.

Below the citadel there is a very large (more than 20 metres long) statue of a lion. The Lion of Belfort was constructed at the end of the 19th century by Auguste Bertholdi, creator of the Statue of Liberty, to celebrate Belfort's attempts to hold back the Prussian invasion of France in 1870 (at the beginning of the Franco-Prussian war).

The lion is a famous local monument and symbol of the courage of the occupants of Belfort. Another Bertholdi work can be seen in the Place de la Republique in Belfort: the Monument des Trois Sieges.

After admiring the main highlights, stroll around the historical heart of Belfort around the Place d'Armes: there are some interesting and attractive buildings in the old town, often painted in decorative colours; large open squares with cafes and bars; and a good selection of shops etc.

Among the highlights are the market hall, in Rue Frery; the old grain hall in Place des Bourgeois; the 17th century Porte de Brisach (the surrounding walls are 18th century); and the town hall.

Belfort cathedral, built in the 18th century in the classical style, is most noteworthy because of the red sandstone it is built with: this stone came from a quarry at Offement just a few kilometres from the town. 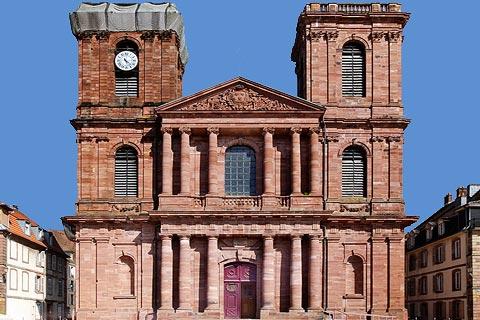 Another religious monument in Belfort is the Church of Saint Joseph. At first glance this has the appearance of an old church but you quickly notice it is more simple and angular than most churches. In fact it was built at the beginning of the 20th century in the neo-gothic style as thanks to the town for the shelter it provided to people from Alsace when that region was conquered in the Franco-Prussian war of 1870.

Photos of Belfort by Thomas Bresson are copyright.

The town has a good selection of museums covering a wide range of interests, particularly related to local history and the arts. The Museum of Modern Art includes works by such notable modern painters as Picasso, Braque and Leger, and there is a history museum inside the fortress.

The southern Vosges region is an attractive area offering lots of outdoor opportunities, centred around the so-called Ballon d'Alsace and surrounding natural regional park. Alternatively head south of Belfort and into the Jura mountains to admire some very lovely sceneery and viewpoints.

The leisure lake at Malsaucy is popular during the summer months.

One other site close to Belfort are the caves at Cravanche (grottes de Cravanche) although they have very limited opening hours (at the time of writing, they are open during the French days of patrimony only: the third week in September).

Map of Belfort and places nearby

Visit near Belfort with France This Way reviews

Belfort is classified as a village in bloom (ville fleurie) 4*

Plan your visit to Belfort, Territoire-de-Belfort

Regular market(s) are held in Belfort each Wednesday & Thursday & Sunday & Monday & Friday. (Markets are held in the morning unless stated.)

The French version of this page is at Belfort (Francais)