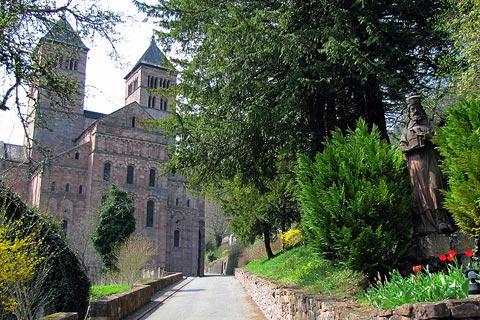 Murbach is a small village in the Haut-Rhin department of the Alsace region near Guebwiller. The village itself is in a deep verdant valley, and is little more than a group of houses - and an important abbey.

Founded in 727, the benedictine abbey at Murbach was at one time one of the most powerful and influential in the region, with extensive lands under its control, and was also a leading intellectual centre for the region.

The abbey had two periods of great influence - the first around the 10th century and the second from the 12th century onwards, and retained an important role until the 18th century. In 1759 the abbey lost its status, and it was at this time that much of the original building was demolished.

As a result the abbey that we see today is only a part of the original roman style 12th century church - only the chevet and choir still remain, and the associated abbey buildings have largely disappeared, but despite this it is a beautifully proportioned building in an attractive wooded valley setting, and a visit is recommended.

From a distance the main facade appears simple but very well proportioned, with a square tower to each side and two levels of arches inset with stained glass windows. When you get closer spend some time looking at the facade, because a close inspection reveals several interesting features, such as the ornate carved decoration at the bottom of the series of columns and the decoration above the doorways, which adds further to the appeal of this Romanesque abbey.

Inside Murbach abbey it is the funeral monuments to count Eberhard and several monks - carvings and tombs - that are of most interest.

Back outside, enjoy a stroll around the 'English style' abbey gardens then take the walk up the hill towards the Chapel Notre-Dame-de-Lorette for a lovely view back to the abbey. This is an important part of your visit to the abbey because it follows the Chemin de Croix (Path of the Crosses) and calls to mind the Passion of Christ.

The main towns here in this region of Alsace are Colmar to the north and Mulhouse to the south, and in the area around Murbach you are well placed to visit villages such as Eguisheim and Guebwiller as well as visit the Ecomuseum at Ungersheim.

Map of Murbach and places nearby

Visit near Murbach with France This Way reviews

Plan your visit to Murbach, Haut-Rhin

The French version of this page is at Murbach (Francais)