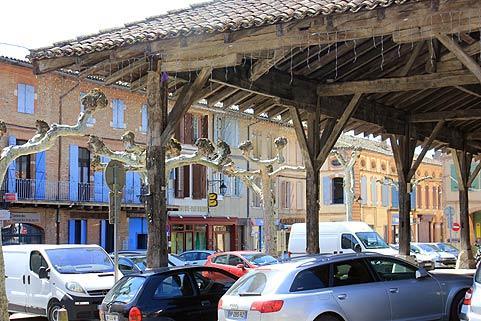 Beaumont-de-Lomagne is in the department of Tarn-et-Garonne close to two of the most beautiful villages of France: Sarrant at 13 kilometres and Auvillar at 22 kilometres. It is a bastide town built in an attractive mix of brick and stone and dating back to the 13th century.

The town of Beaumont-de-Lomagne was founded in the 13th century and its main square, the Place Gambetta, is still dominated by a large wooden market hall built in the 14th century. Surrounding the market hall are attractive medieval buildings built of brick or stone and some of them with attractive arcades. 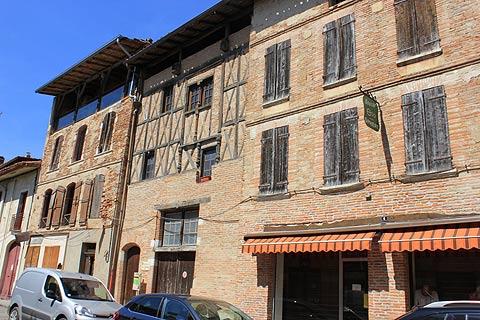 France This Way comment: every Saturday morning the weekly market takes place under cover of this large open-sided hall and this is the most lively time to visit the town if possible.

Near to the central square is the large Gothic church of Beaumont-de-Lomagne and its octagonal bell-tower. Inside the church is a large organ which is a classified 'Historic Monument'. Around the Place Gambetta and in the surrounding streets there are a number of particularly noteworthy buildings:

The Hotel Pierre de Fermat on rue Fermat is now home to the Beaumont-de-Lomagne tourist office but was the birthplace of the famous mathemetician Pierre Fermat. Its tower houses an exhibition of mathematical games and enigmas. Elsewhere in the Hotel Fermat there are two large 15th century fireplaces and a ceiling with the remains of some frescos and you can also get a good view across the town from here. 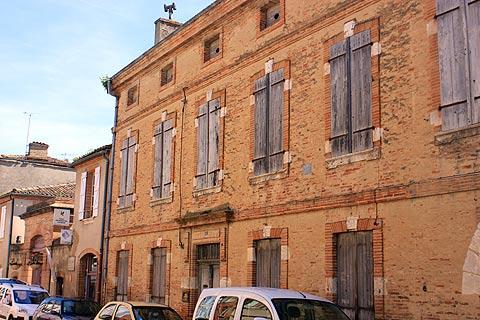 Map of Beaumont-de-Lomagne and places nearby

Visit near Beaumont-de-Lomagne with France This Way reviews

Plan your visit to Beaumont-de-Lomagne, Tarn-et-Garonne

Regular market(s) are held in Beaumont-de-Lomagne each Saturday. (Markets are held in the morning unless stated.)