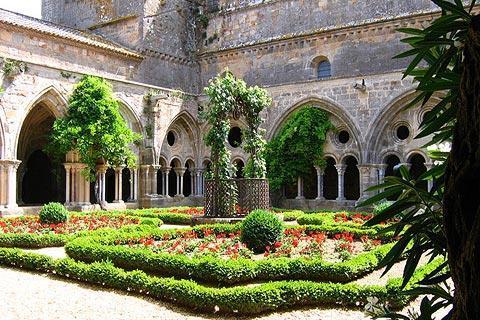 Fontfroide Abbey is situated to the south-west of Narbonne in the Aude department of Languedoc-Roussillon. The setting and surroundings in a quiet wooded valley within the Corbieres mountains is almost impressive as the abbey itself at Fontfroide.

The benedictine abbey we see today dates from the 12th century (with substantial 17th century additions), although the monks had already been situated here for a century before that. The church and cloisters are the most important buildings from this period. 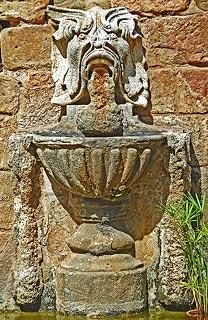 One key event in the history of the Abbey was triggered at the beginning of the 13th century - it was the murder of a monk from the abbey, Pierre de Castelnau, in 1208 that prompted the Albigensian Crusade, and the abbey supported the crusade in the (ultimately successful) battle against the cathars in the region.

This led to a period of prosperity for the abbey, culminating in an abbot from Fontfroide, Jacques Fournier, becoming Pope Benoit XII in 1334.

The abbey's life as a monastery was less consistent from this time on, in part due to the Black death which killed 75% of the monks here in 1348 and in part because of the divide in the catholic church which resulted in the 'anti-popes' being established in Avignon - one of the Anti-Popes, Benoit XIII, seized the assets of the abbey, although these were subsequently returned.

From the 15th century onwards the importance of the abbey was in decline, and in 1764 it officially lost the title of abbey. It was now in the hands of abbots who renovated much of the building and added many new section in the classical style, such as those around the Louis XIV courtyard. These abbots were not monks and this explains some of the additions to the building being slightly less monastic and rather more 'homely' than expected.

After the revolution the abbey was sold, but managed to avoid the damage suffered by many French religious monuments, and was then once again occupied by monks from 1858 onwards, until a law passed in 1901 outlawed communities of monks.

At the beginning of the 20th century the abbey fell into private hands, and was further renovated and modified, including the addition of the stained glass windows (the originals having been lost over the preceding century).

The abbey church is a simple design, both inside and outside, with the small octagonal belltower being the most decorative element. Inside the church there are several chapels added in the 14th century.

From here you can follow the Ruelle des Convers to reach the cloisters. The impressive cloisters form the centre of the abbey complex, and with their well-maintained gardens form the highlight of a visit to this well proportioned abbey - the arcades around the cloisters consist of stone arches each with multiple columns and capital stones.

You can also see the salle capitulaire, and the dormitories and refectories with their vaulted ceilings at the abbey. Your visit to fontfroide Abbey itself can be followed by a stroll through the gardens. The rose gardens and the other gardens here are held in very high regard by garden enthusiasts.

There is also a marked trail through the surrounding countryside, and wine tasting is available in the abbey cellars.

Fontfroide Abbey is open every day except Christmas day and New Years Day, with entrance to the Abbey and gardens costing about 13 euros.

No visit to the region around Fontfroide Abbey would be complete without a visit to Narbonne. Your children will also enjoy a visit to see the wild animals at the Sigean Nature Reserve or visit more abbeys in France.

Map of Fontfroide Abbey and places nearby

Visit near Fontfroide Abbey with France This Way reviews

The French version of this page is at Fontfroide Abbey (Francais)