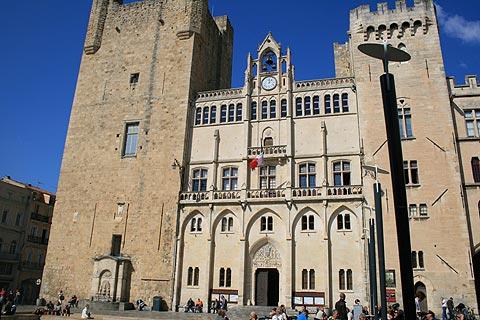 Narbonne is an important town in the department of Aude in Languedoc-Roussillon that was once the capital of the first Roman colony in Gaul and later a capital of the Visigoth kingdom.

Until the middle ages Narbonne was a prosperous city and port but plague, war and a harbour that was prone to silting up led to a decline in its fortunes. However it remains an attractive city on the Mediterranean coast between Perpignan and Montpellier.

Nice shops, an attractive area around the cathedral full of cafés where you can stop for a coffee and a sandwich, the Canal du Midi (Canal de la Robine at this point) running through the centre of the town and a whole selection of beautiful buildings with interesting architectural features make Narbonne well worth a visit. 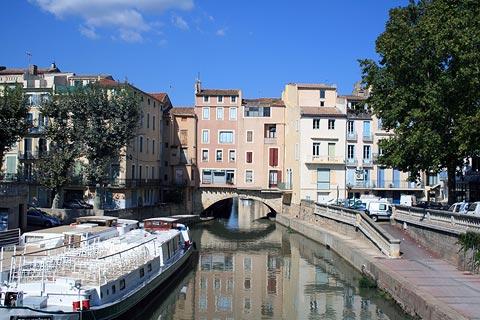 The main attractions in Narbonne are conveniently situated close together in the centre of town, in and around the the Place de l’Hotel de Ville. They include the Bishops Palace and the Cathedral:

The Palais des Archevêques (the Archbishops Palace): This very imposing building includes various styles and is dominated by a large 13th century tower and two other medieval towers. There are actually two Palaces here: the Old Palace in the roman style of architecture, and the New Palace in the gothic style.

The palace now holds the Town Hall for Narbonne as well as the Archaeology Museum and a Fine Arts Museum. Le Cour de la Madeleine, the old palace courtyard, is entered through a gateway, and the area is dominated by the Saint Theodard bell tower and the cathedral.

The Cathedrale Saint Just: despite its size the cathedral is in fact unfinished with only the choir completed. Finishing the building would have involved demolishing part of the city walls and so work stopped in 1340, and was never resumed after the town was invaded by the Black Prince in 1355. Excavations at the site have revealed three older religious structures predating the current cathedral.

On the outside the structure is lovely to see with its large flying buttresses. Inside it is the height of the cathedral which is impressive and it has some very impressive 14th century stained glass windows, and in the treasury you can see various interesting artefacts including a Flemish tapestry of the 15th century depicting the creation of the world.

In the centre of the Place de l’Hotel de Ville you can see a section of the original Roman road that was once in the centre of the town, the Via Domitia, dating from the 4th century. Outside of the square and in the network of streets around the cathedral there are other monuments of interest, including the towers of St Martial, the Madeleine, and the Gilles Aycelin keep.

On the course of the canal you can see a part of an ancient bridge called the pont des Marchands. This was once a large bridge with seven arches, but lost its importance when the Aude river changed course and now only one arch can be seen - the others are now the cellars of adjacent houses. It is one of the rare bridges in Europe to be built on with houses.

Not far away L’Horreum (the grain store) is the only building in Narbonne that remains from Roman times: inside the grain store there are lots of underground galleries in which goods were stored (although the main storage building has disappeared), and various remnants of other Roman buildings are displayed.

On the edge of the town centre you can see the Basilique Saint-Paul, an early Gothic church which has been built on the site of a 4th-century necropolis.

Les Halles is an award winning covered market open every day and a great place to stock up on local fresh produce. The market in Narbonne is one of the best in France. 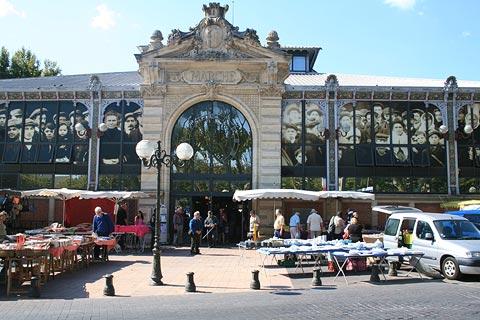 France This Way comment: although we have mentioned the most important tourist attractions above, as you would expect of the largest town in the Aude department Narbonne also has several parks and gardens to visit, a wide choice of shops, cafes and restaurants and an extensive area of more recent development...

The Archaeology Museum in the archbishop’s palace has a gallo-romain section which includes lots of remains illustrating the life of Narbo-Martius from the time when the town was a Roman colony in 118 BC, and is well worth a visit.

Le Musée d’Art et d’Histoire includes a visit to the apartments of the archbishop arranged as they were in the 17th and 18th centuries.

Near Narbonne we suggest you visit Fontfroide Abbey, a beautifully preserved monastic estate complete with church, cloister, chapter hall and laybrother’s buildings. Children and adults alike will enjoy a trip to the Sigean nature reserve at 20 kilometres south of Narbonne.

Map of Narbonne and places nearby

Visit near Narbonne with France This Way reviews

Plan your visit to Narbonne, Aude

Regular market(s) are held in Narbonne each Sunday.

A seasonal market is held in Narbonne on Tuesday & Thursday & Saturday & Monday. (Markets are held in the morning unless stated.)

The French version of this page is at Narbonne (Francais)