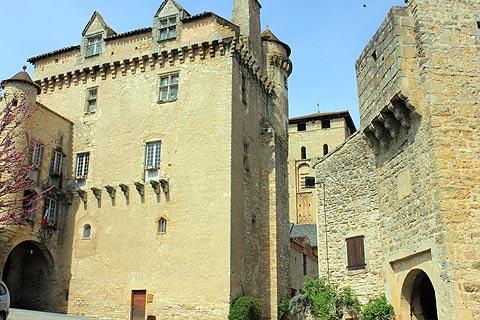 Varen is a fortified village with a small but interesting historic centre in the Tarn-et-Garonne department of the Midi-Pyrenees Region.

The fortified village of Varen suffered greatly during the Wars of Religion: between 1573 and 1582 more than 200 residents died in the Wars, which was a great deal for a fairly small village! Things are rather more peaceful here today... 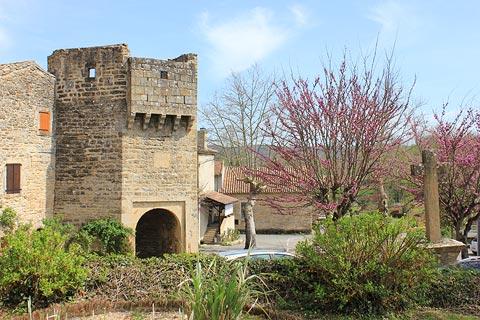 The most important historic monument in Varen is its attractive chateau, the Chateau du Doyenné,  which was built in the 15th century. It is now home to the mairie. Its round tower acted as a lookout to spot enemy troops approaching the town.

Across the square from the castle is an attractive fountain which has supplied Varen with water for centuries (note though that it is not drinkable).

Next to the castle is the large stone entrance gate to the town on which you can see the battlements which stick out above the gateway. These were added to the original gateway in 1621 in order to strengthen its defensive role, and missiles could be dropped through the holes on to anyone trying to force an entrance through the gate.

The church of St Pierre dates back to the 10th century and was originally part of the town defences, one wall of the church being built in the walls that defended the town. The church has a very attractive interior with tall narrow arches and interesting side-chapells, and on the outside its three-storey bell tower joins the castle and entrance tower in dominating the Varen sky-line. The church is one of the few churches whose entrance and bell-tower face the east rather than the west.

Varen is on the edge of the river Aveyron and the Moulin de Varen sits right on the river making it a lovely position to stop for lunch, or you could bring a picnic and sit by the river. 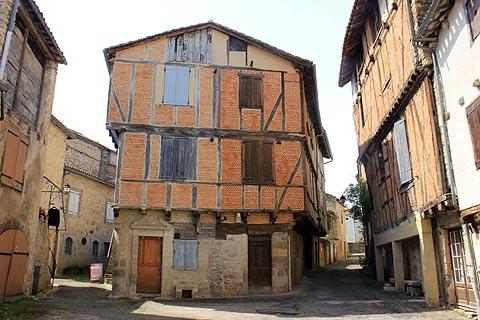 Not far from Varen you can visit Saint-Antonin-Noble-Val, a lovely town with a beautiful medieval centre and a riverside position.

One of the 'most beautiful villages in France', Najac is just a few kilometers away in the neighbouring Aveyron department. It has a lovely ridge-top position and is dominated by its fortress built at the highest point.

Map of Varen and places nearby

Visit near Varen with France This Way reviews

Plan your visit to Varen, Tarn-et-Garonne

The French version of this page is at Varen (Francais)