The Chateau de Najac - also called the Royal Fortress of Najac - is situated on a hill above the town of the same name, in the picturesque countryside of the Aveyon department.

France Ths Way comment: when you visit the village of Najac, the castle has several interesting military features and very good views across the village and countryside and is well worth a visit - although it does involve quite a steep walk to reach the fortress!

Due to its elevated position and strategic importance, there has been a castle here since around 1100 and the current castle was built in the 13th century around an earlier tower as a strategic outpost to defend Villefranche-de-Rouergue. 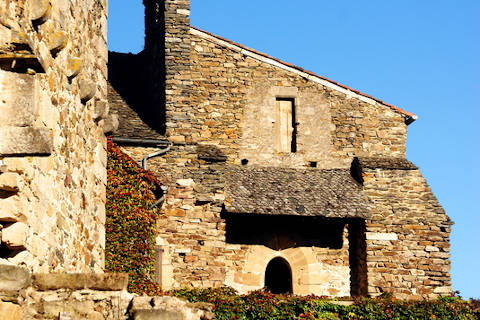 The earlier castle played an important role during the Albigensian Crusade in the early 13th century, during which it became a key strategic cathar stronghold. The cathars were eventually defeated by Simon de Montfort, and the prisoners were forced to build the church in Najac as a punishment.

The current castle in Najac was built around 1253 under the command of Alphonse de Poitiers: the square tower that you can see in one corner is the principal part that remains from the earlier castle. On the frontier between the English and French sides during the Hundred Years War, the castle frequently changed hands during the course of this war.

The design of the castle incorporates many elements of 13th century defensive architecture, such as narrow passages and staircases and low doors to prevent the enemy advancing within the castle. It is rectangular in shape, with a tower in each corner and incorporating the castle keep, a large round tower. Parts of the original defensive walls still surround the fortress.

Highlights when you visit the castle in Najac include a spiral staircase and a long secret passage between the castle keep and the chapel.

One particular feature is the narrow slits for the archers to shoot through which are the longest in the world, at 6.8 metres. These significantly increased the defensive capabilities of the castle by enabling up to three archers to fire at the same time.

The views from the top of the castle keep (donjon) are very attractive and far-reaching, and include stunning views over the large curve in the river below: this is called the 'boucle de l'Aveyron and encircles part of Najac village and the fortress.

After its military use had passed, the Chateau de Najac was abandoned and used by the locals as a quarry to supply rock for their building projects, and was largely in ruins by the 18th-19th centuries. This situation continued until the castle was bought by the Cibiel family, who still maintain the chateau and operate it as a tourist attraction.

Note: the fortress in Najc is closed from mid-November to the end of April, but you can still enjoy the views across the village from outside the castle during this period. Because the castle was a medieval fortress and was never converted into a residential castle, you do not see lots of furnished rooms during a visit as in many castles, but a well preserved fortress. 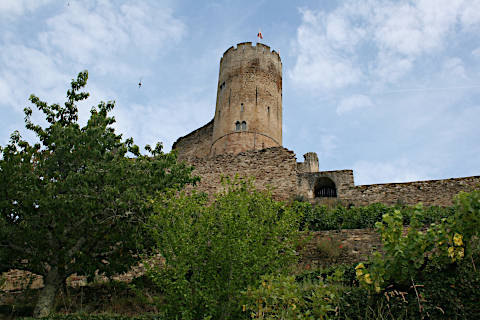 The village of Najac below the castle is classified among the "most beautiful villages in France". Close to here we also enjoyed a walk around the small town of Verfeil-sur-Seye, which has retained its traditional market hall and several colombage houses.

See more castles in France. You can find more travel ideas in the Aveyron guide and the Midi-Pyrenees guide.

Map of Chateau de Najac and places nearby

Visit near Chateau de Najac with France This Way reviews