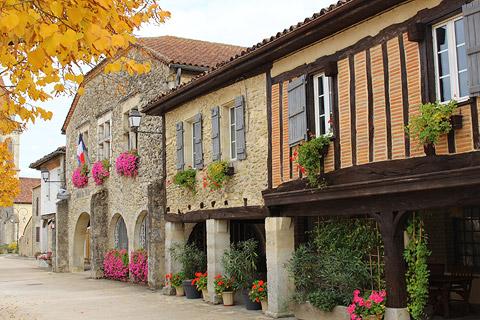 The village of Saint-Justin is at the south-eastern limit of the extensive forest of the Landes and about five kilometres west of Labastide d'Armagnac.

France This Way comment: although it is quite small, Saint-Justin has a nicely preserved village centre and several buildings of interest. 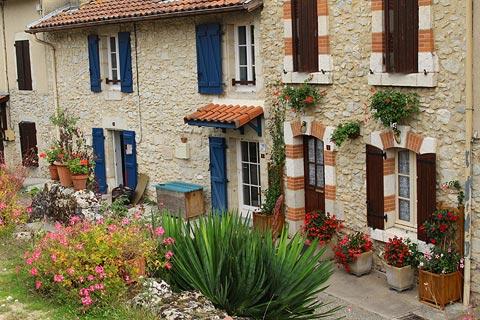 Most of the interest here is in and around the central square, which follows a traditional bastide layout and is a large open square surrounded by historic buildings.

The manor house, along one side of the square and the most imposing building in Saint-Justin, was originally a medieval tower next to various small other buildings: these were combined in the 19th century to create one large property.

Outside the main square you can follow a path along a section of the original ramparts as well as see the church and war memorial and the Tower of the Templars, once part of the defences around Saint-Justin.

Next to the church there is a tiny door marked "chambre d'arret". This is a small room that was used over the centuries to lock up prisoners awaiting trial. Most amusingly, it was apparently used until the 1930's when anyone in the village had drunk a bit too much and needed to be locked up for a while while they sobered up... 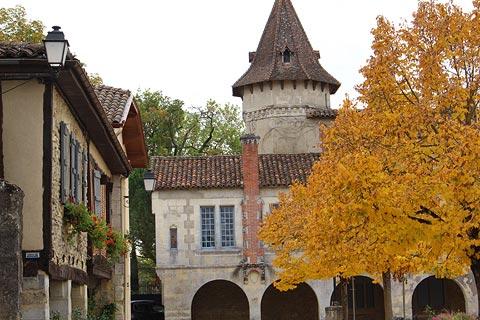 If you would like to further explore the region there are various marked walks that leave from Saint-Justin between six and 10 kilometres long: ask in the tourist office or see that notice board in the centre of the village.

Among the other small villages close to here you will certainly want to visit the bastide town at Labastide d'Armagnac, and we also recommend a stroll around the small village at Mauvezin d'Armagnac: both of these are a short distance to the east of Saint-Justin.

Map of Saint-Justin and places nearby

Visit near Saint-Justin with France This Way reviews

Plan your visit to Saint-Justin, Landes

The French version of this page is at Saint-Justin (Francais)