Meyssac is a lively small market town in the south-west of the Corrèze department of Limousin, about 30 kilometres south of Brive-la-Gaillarde. Perhaps not well known to most visitors to the region, Meyssac has a very attractive and most unusual town centre and we recommend you pause for a look around when you are nearby.

It is easy to visit Meyssac - parking is available around the edges of the town centre and the historic centre is close by. 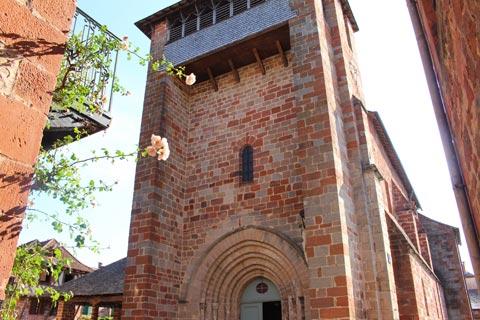 The Church of Saint-Vincent has its origins in the 12th century, and still has its original roman style entrance. Substantial alterations were made to the church both during the Hundred Years War and the Wars of Religion, primarily to add fortifications to the building.

The traditional medieval market hall next to the church was built in the 17th century and retains its red-stone columns and impressive carpentry work. If you follow the road behind the hall you can see more medieval houses in colombage and quickly reach the vaulted passage called the Porte de l'Autrivie.

This passage takes you to the road around the outside of the historic centre where you can see several impressive stone houses including the Maison Noble, with its archway and tower containing a staircase, and the Maison Faige which also has a round tower and dates from the 16th century.

You can also see vestiges of the ramparts which once helped protect the town and another of the original gateways into the centre.

If you are able to visit Meyssac on a Tuesday you can enjoy one of the liveliest markets in the region. 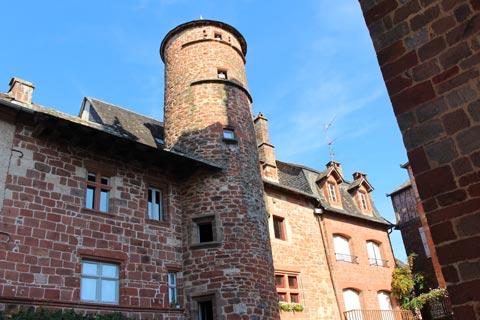 It is without doubt the villages and countryside that are the main attraction in this part of Correze. Just a few kilometres from here you can explore Collonges-la-Rouge, an entire village built with the same red stone as the centre of Meyssac, and other amazing villages nearby include Curemonte and Turenne, among others.

Map of Meyssac and places nearby

Visit near Meyssac with France This Way reviews

Plan your visit to Meyssac, Correze

Regular market(s) are held in Meyssac each Tuesday & Friday. (Markets are held in the morning unless stated.)

The French version of this page is at Meyssac (Francais)