The Gouffre de Padirac is an incredible cave system containing an underground river and gorge and a huge cavern. Underground lakes and pools and stalactite formations all add to its appeal but somehow it is the sheer size of the caverns that is really incredible.

It is the most visited system of French caves and the number one tourist attraction of the Midi-Pyrenees region.

The cave system is 103 meters below ground and can be accessed via a lift or a staircase. Once in the system you are taken by a boat through the galleries and on to the large cavern. The boat is punted by a guide who can tell you a bit about the formation of the cave system. 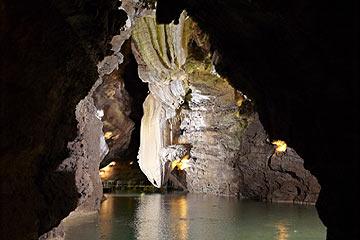 As you glide over the "Lac de la Pluie" or lake of rain, you do indeed find yourself being 'rained' on by the water which is permanently running down the walls and in places overhead as it runs over one of the stalactite formations.

At the edge of the main cavern you leave the boat and begin the walking tour into the heart of the cathedral-like space that is the 'Grand Dome'. This cavern is incredible, with the river flowing along the bottom, a majestic rock enclosed space opens up above you with stalactite formations in places. The dome is 94 meters high.

A steep staircase then leads you up to the top of the cavern to get a view of the cavern from above and the sight of some lovely water pools along the way. (It is possible to walk back along the edge of the river to the boats if the climb is likely to be too much for you).

History of the Padirac Cave

At some point in time a section of roof fell in on the underground cave system forming a chasm 75 meters deep and a diameter of 35m.

However it was not until 1889 when Edouard-Alfred Martel, an amateur explorer, lowered a ladder and discovered the wonders below. Martel and his team realised they had encountered something extraordinary and began a series of expeditions to explore the site.

Martel lacked the money to develop the site but a stroke of luck led to the opening of the caves. Martel forgot his maps and development-ideas for the Grotte in a Paris taxi and the next passenger happened to be George Beamish, wealthy heir of the Irish Beamish beer company. He was fascinated and asked Martel if he could be involved in the project.

9 years later the works finished and the first visitors descended into the cave. The official opening was in April of 1899. Visitor numbers continued to rise and nowadays an incredible 400, 000 people visit every year! 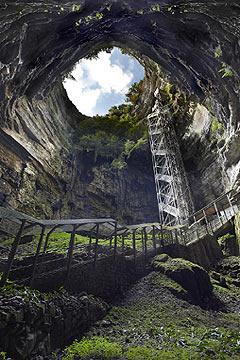 Legend of the Gouffre de Padirac

Because of the big hole in the ground the Gouffre de Padirac has always been linked to various legends, generally involving the devil!

One of the main legends is that of Saint Martin. The devil apparently formed the chasm with a kick of his heel and challenged Saint Martin to cross it. The devil said that if Saint Martin succeeded he would spare the souls of the peasants he was about to drive to hell. Saint Martin spurred his mule and leapt the chasm and the hoof marks can still be seen today!

When I visited the cave recently I was amazed to see a virtual village surrounding the cave. There are a number of buildings that were built in the 1930s when tourism really took off. These are the ticket office, a cafe, a kiosk and a buvette (for drinks and snacks) and are all built in a similar style. There is also a very pleasant park which was laid out and planted at the same time and is a great place to relax before or after a visit to the caves. There are also various other cafes and restaurants and lots of parking.

When I arrived and saw all the cars I was worried that long queues were awaiting me, but no. The whole site seems to be run very efficiently. Despite it being a busy day in July I had a wait of only about 20 minute at the ticket office followed by a 5-10 minute wait underground to get on one of the boats. Given the number of visitors it was very impressive. It is possible to book online to avoid the queues.

The cave is open every day from Easter to the end of the All-Saints holiday in October.

Where is the Gouffre de Padirac

The cave is about 15 minutes from Rocamadour in the Lot department and is well signposted when you are close.

The nearby village and pilgrim site of Rocamadour is another of France's top destinations and not to be missed.

Map of Gouffre de Padirac and places nearby

Visit near Gouffre de Padirac with France This Way reviews