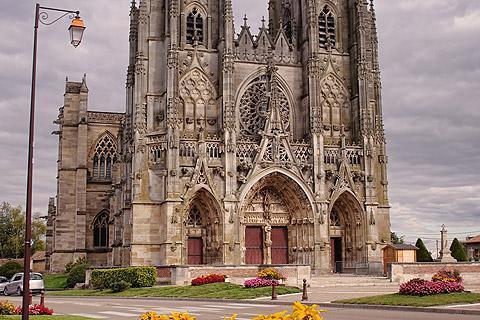 The village of Épine, in the agricultural landscape of the quiet Marne countryside to the south-east of Reims and close to Chalons-en-Champagne would go unnoticed if it were not for the presence in the village of one of the most important historical landmarks in the Champagne-Ardenne region...

Epine has been a site of religious importance and a destination for pilgrims since the Middle Ages when a statue of the Virgin Mary was discovered surrounded by a burning thorn bush. The cathedral was built from the early 15th century onwards, in a project that was to take more than 100 years to complete (the cathedral was finished in 1527) and in what is known as the 'flamboyant gothic' style. 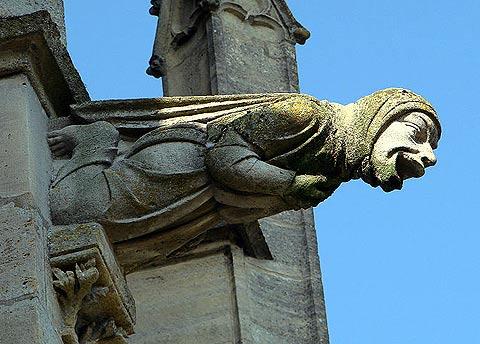 The entire facade of the cathedral is ornately decorated, including the main entrance and two side entrances, and the substantial (and irregularly sized) towers to either side. You probably won't notice but the left hand spire is actually a 19th century reconstruction of the original. The carvings and statues around the doorways are particularly well preserved and of very high quality.

The facade also has a good number of carved gargoyles, some in the form of people and some with very unusual designs - such as a crocodile or unrecognisable beasts fighting - to provide entertainment to your children if they are not usually enthusiasts of medieval architecture!

Among the most notable artefacts within the basilica at Epine you can see a wooden sculpture of Saint-Jacques, dating from the 16th century.

The cathedral is also well known for its carved stone 'rood screen' (jubé in French) between the nave and the choir sections, and a statue of the lamentation of Christ (also called a mise en tombeau) representing various charaters around Christ as he is placed in his tomb.

The altar is also from the 16th century but note that the organ and the stained glass windows in the Epine basilica are more recent, added in the 19th and 20th centuries.

Because of the historical importance of the basilica as one of the sites along the medieval pilgrimage route to Compostella the basilica is now listed as a UNESCO world heritage site (as are about 70 other monuments along the same routes). 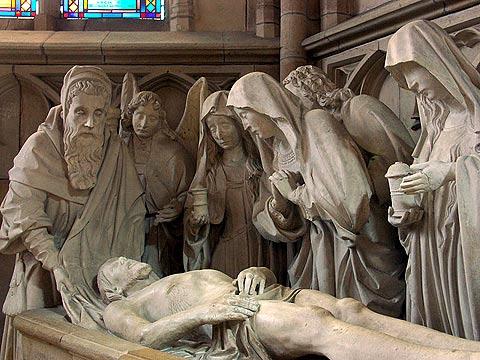 A short distance south-west of Epine you can visit Chalons-en-Champagne which has several impressive churches and religious monuments. To the north-west of the village you will also want to visit Reims, an impressive town with several important monuments and numerous buildings of interest.

Map of Epine and places nearby

Visit near Epine with France This Way reviews

Plan your visit to Epine, Marne

The French version of this page is at Epine (Francais)